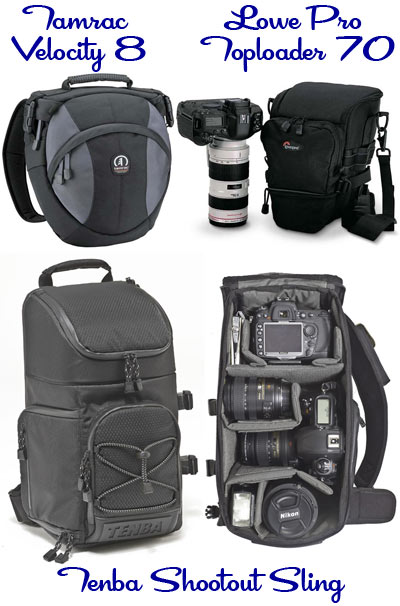 I have had problems with camera bags.  Of course, I overload the bag and then complain about my neck and shoulder the next day.  This has been going on for a while.

I had been using Lowe Pro’s Toploader 70 AW for about 5-years.  I changed the bag strap with a neoprene stretch strap from Promaster.  This combo was a good solution except when I wanted to carry a second lens.  Last year at Photoexpo Plus, I  decided to look for a new camera bag.  I started with Lowe Pro since I already have a collection of them.  I decided a sling would work best for me … a good size bag which can be worn on either shoulder but can also be worn across the back like a backpack.  I tried on Lowe Pro’s Slingshot 200 AW.  I HATED IT! It felt heavy without anything in it.  The inner compartments seems to bury to much under velcro flaps and that top compartment would just not work for me.  Very disappointed.

I then looked at the bags from Tenba, Domke, Pelican, Case Logic and Kata.  None were right.  I liked the idea of a sling, but could not find the right bag.  Thankfully, I stopped at Tamrac and saw the Velocity.  That was the bag!  The Velocity 8 had a big main compartment which could hold a camera with lens attached and two other lenses or one lens/one flash.  This worked…at least for a while.

I love filters but there was no room in the bag to carry them without crushing or breaking.  I added a velcro pouch to the side which worked but always caught on something/someone in a crowd.  Also, when the bag was fully loaded, I would normally wear the bag on one shoulder like a messenger for quick access.  This caused direct pressure on my neck.  I even added an extra cushion to the other side of the strap so that I could shift shoulders.  Again, this worked but not great.

Now that I have the 85mm L, I want to bring that along.  It is not a small lens, and now there is a capacity issue … I just ran out of space! So, back to shopping for a camera bag.

So which camera bag had even the guys at B&H raving?? Tenba’s new Shootout Sling (Medium)! The Shootout is almost the same size as Lowe Pro’s Slingshot 200, but it is sooooo much nicer!  It features:

This is a cool bag!

Update: 4/12/09:  My first day out with the Tenba Shootout. Really love this camera bag. Perfectly weighted, even fully loaded. It was comfortable as a sling and as a messenger on one shoulder.