In Part 1, HDR Test: Photomatix, FDR Tools & Dynamic Photo HDR, I reviewed the basics of each program and generated a test image from two images of the same still scene.

Creating High Dynamic Range (HDR) images from still scenes is pretty easy. All you need is to merge the best highlights, medium tones and shadows into one final composite. You could even create it yourself by hand in Photoshop … in a few hours.

The real challenge comes from busy scenes with moving objects or people. In this situation, you have one or more objects in one photo but not in the other. You could also have the same object travelling throughout the photos. These situations are called “ghosting” and each of the HDR programs handle the situations differently. Below are the test images. 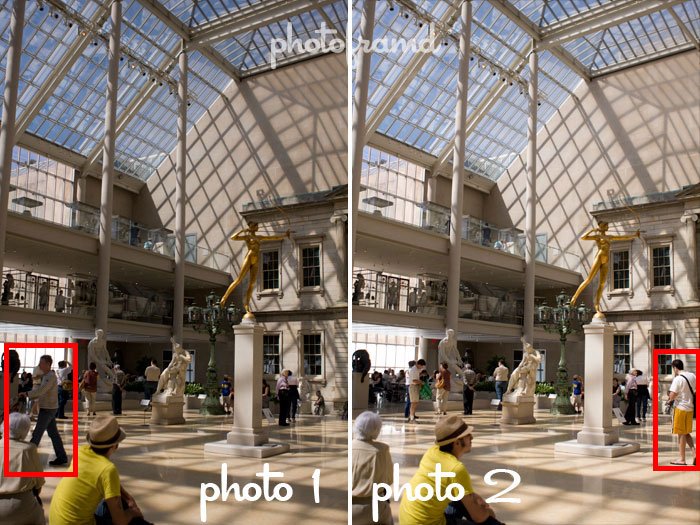 The red boxes hightlight the differences in the two photos which will cause ghosts. My goal is to keep the guy in the yellow shorts and loose the other guy with the stroller. Let’s see how the programs handle it.

Photomatix by HDRsoft: There are two settings built into Photomatrix to address ghosting, Background movements or Moving objects/people. In both of these settings, Photomatrix does the removal with no user defined adjustment options. The results are hit or miss. See below. 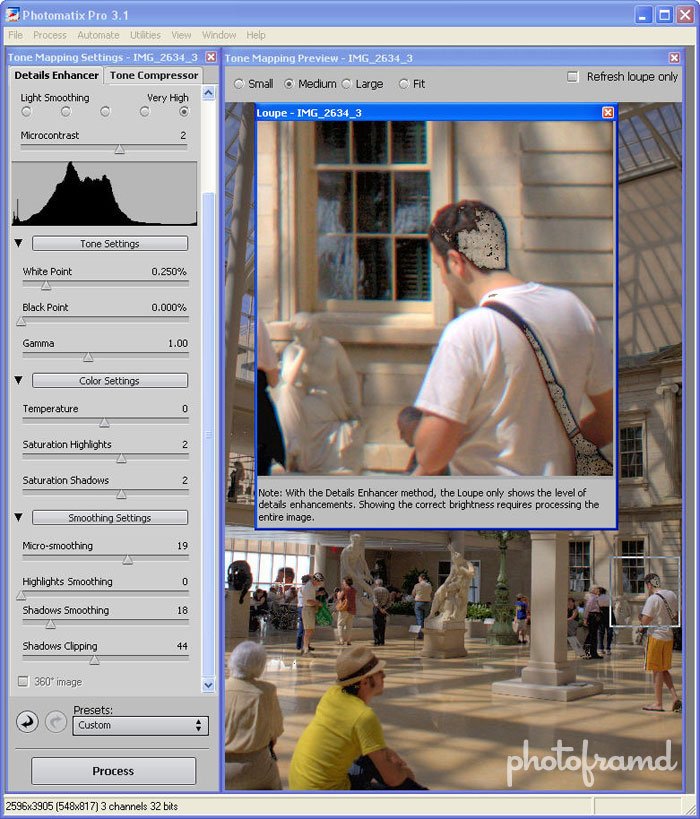 With Photomatrix, the guy in the yellow shorts is partially removed. And the stroller guy is just a floating head. Both of these problems could be fixed in Photoshop, but that’s not the point. I was not given the option of picking what to keep and what to remove.

FDR Tools Advanced: The more I use this program, the more I like it. FDR Tools has multiple tools and methods to allow YOU to choose what to keep and what to remove! Take a look below. 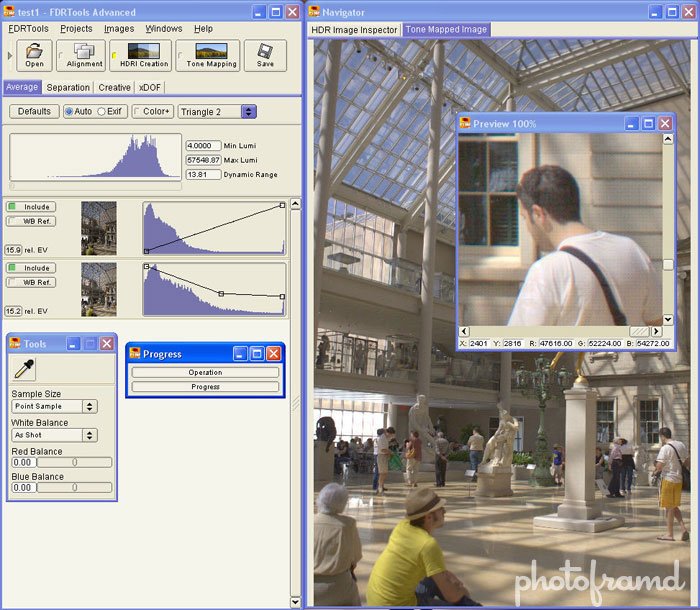 FDR Tools represents each image separately in the HDRI Creation Tool. You can use either the Average tab or the Separation tab to identify which parts to keep through the tonal values. The Average tab above uses the a curve in each photo to identify the blending. The Separation tab works in a similar fashion but with sliders. I used the Average method to keep the yellow shorts guy and loose the stroller guy. But, that not all… 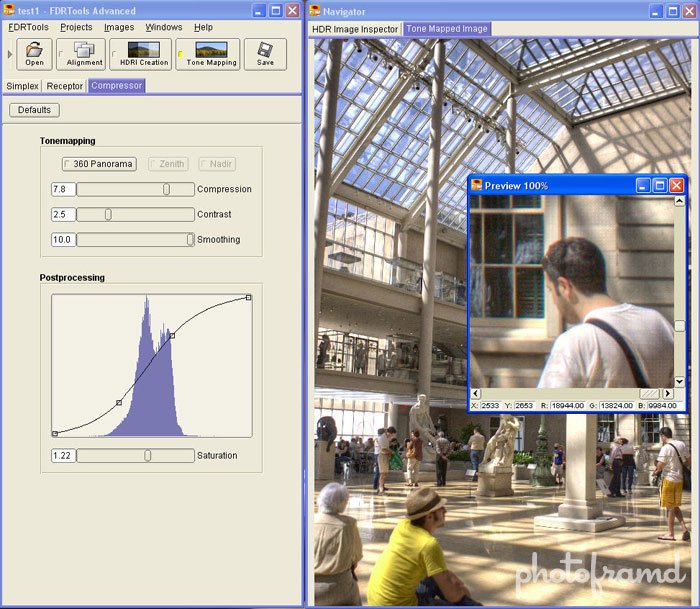 Once you have dealt with the ghosting, you can still manipulate the image. I used the Tone Mapping to give a typical S-curve to the highlights and shadows! The final result is below. 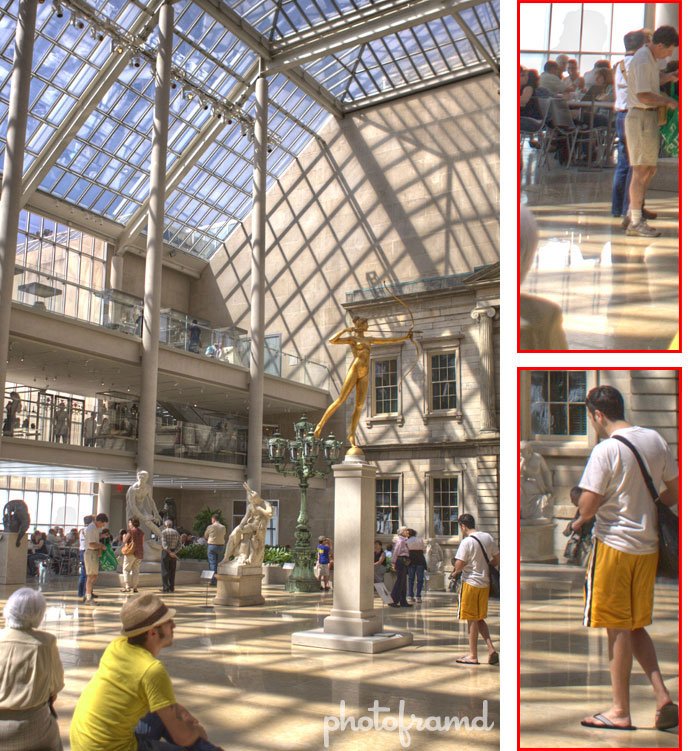 You will notice a slight ghost of stroller guy in the windows highlights which can be easily fixed in Photoshop. Otherwise, the final image is great!

Dynamic-Photo HDR: I was so excited about this program. It uses masks to remove ghost images. Just brilliant and so intuitive! Unfortunately, the results were very disappointing! 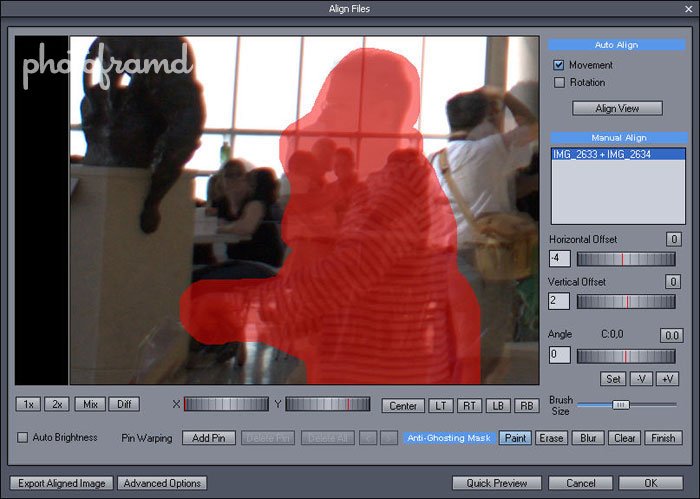 I started by ghosting stroller guy and generated the image. For some reason it kept him, and partially removed the yellow shorts guy! Hmmm… I read in the manual that you are supposed to mask all ghost objects and Dynamic-Photo HDR will choose what to keep and what to remove.  Not what I want, but I continued the process to see the results. 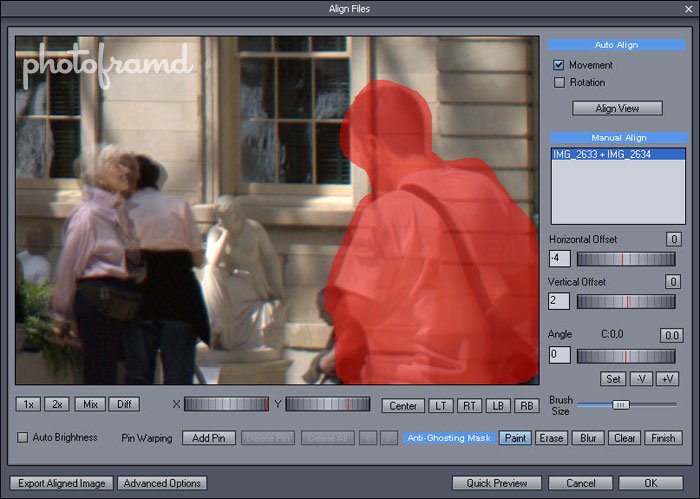 So with both guys masked, I generated the results. You can see both attempts below. 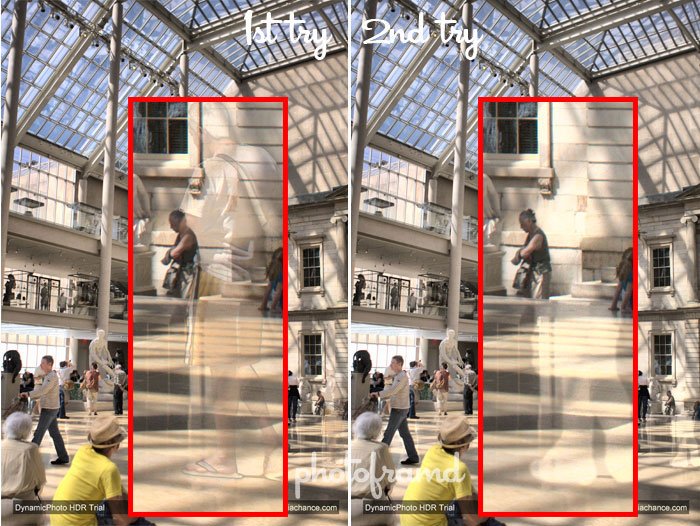 In both attempts, Dynamic-Photo HDR chose to keep stroller guy and he looks pretty good. Still, not what I wanted. The guy in the yellow shorts was a problem. In the first attempt where he was not masked, he became a real ghost. In the second attempt, you can clearly see a highlight where he once stood. Neither attempt is acceptable and both would require a lot of Photoshop time to remove!

Although any one of the programs can produce acceptable results, so can Photoshop and you do not need to buy anything new. If you are going to spend for an additional program, it should produce results that are worth the investment. Based on the tests in Part 1 and here in Part 2, I would recommend only FDR Tools. After spending time with all three programs, FDR Tools had the best options and produced the best final images. There are trial versions of each program, so you can test them yourself. Please let me know your results.