“Breaking the fourth wall” is a term used in theater and television when an actor speaks through the camera directly to the audience.  The actor is acknowledging the viewer and making a direct connection.  The actor demands attention and the audience responds.

Breaking the fourth wall has also been used in digital arts and advertising.  Just like in the theater, it commands attention in a way that is interesting and unique.  Take a look at the following example.

The photo on the left is the original version.  The image on the right is breaking the fourth wall just by masking the kids and the water fountains.  Instead of creating a complete silhouette, the kids retain a portion of the original “stage”.  The fallen photo completes the effect and draws the viewer into the subject in a focused way the original photo can not.  My Photoshop file is below. 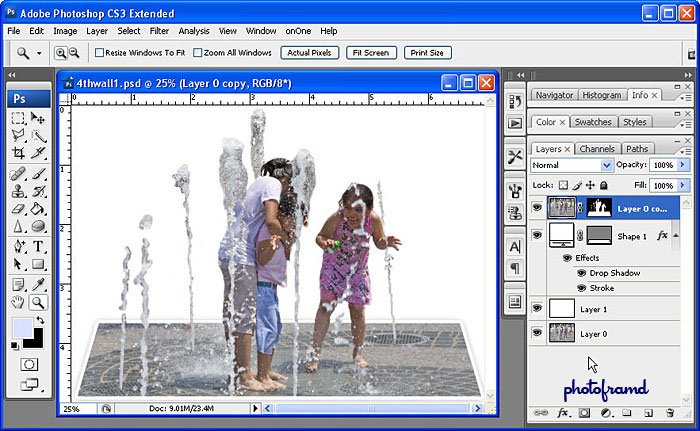 The masked photo is the top layer.  The second layer creates the frame of the fallen photo by applying a stroke and a drop shadow through Blending Options.  The White layer below fills the space and can be any color you need.

Another method of breaking the fourth wall involves a more subtle application.  Just by masking and framing the subject, you can focus the viewers attention on the subject.  Variations on this technique are very effective for advertising.  Take a look:

The original photo is on the left.  The essence of the NYC skyline is “captured” by the frame on the right.  The light blue background color creates the perfect space to place a headline and ad copy.  The light blue unifies the background, simplifies the photo and puts more emphasis on whatever text is placed there. 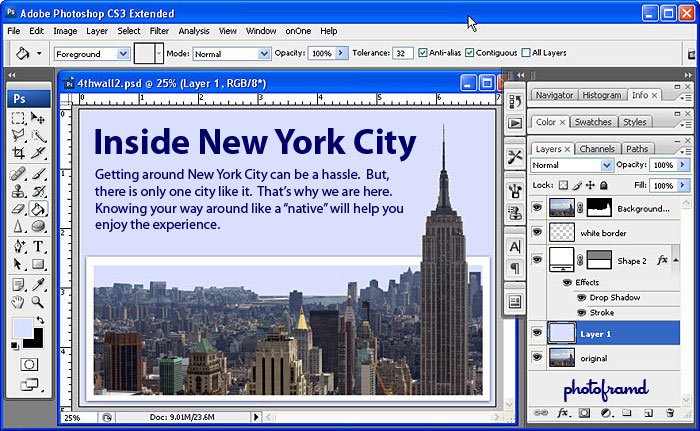 Breaking the fourth wall can be dramatic or subtle.  In any event, it has power that will get the viewers attention.