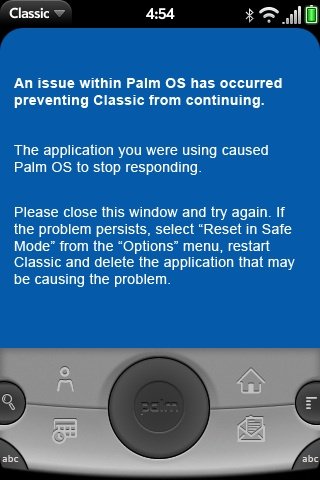 Wow, this is something that I thought died with Windows’95! Apparently, MotionApps was feeling nostalgic and programmed in a Blue Screen of Death into their Classic PalmOS Emulator for the Palm Pre.  I am now very familiar with this screen since I get it every time a run their Classic App.  And, what is MotionApp explaination?? Don’t Know since they are not even answering their phones nor Support Tickets on their site.

It all started with Palm’s update to 1.03.  Before this update, Classic was working great and I had all my favorite Astraware games (Bejeweled2, Chuzzle, Hammerheads, etc.) running perfectly.  There was no sound, but you could play the games.  Apparently, Palm’s 1.03 update was supposed to incorporate some files which Classic needs.  Well, something bad happened along the way and the Blue Screen of Death made its first appearance.  MotionApps has tried issuing an update through the Palm Apps Store, but that did not fix the problem.  Then, they posted on their website about manually installing an ClassicROMUpdater.prc which if you follow their instructions just causes another Blue Screen.

It seems Palm or MotionApps decided to change the file structure and how you can install/update files within Classic.  Any program placed in the new “Install” folder within Classic triggers the Blue Screen.  I did manage to get the ClassicROMUpdater to install by using the “Launcher” folder and it seemed to be stable.  However, as soon as I tried to install my games using the Install folder (as they clearly state is the “new” method) and Importing them, the Blue Screen of Death is triggered.

By the way, I did find that you can create a screen capture on the by holding down the orange key + shift + P keys all at the same time.  There will not be an acknowledgement on the Pre, but the image will be saved as both a JPG & PNG in a folder called “Screen Captures”. This folder will be accessible through the USB cable and the USB Media Sync option.