Over the past 2 days, I have discussed the basics of Swift3D PS (Part 1 and Part 2).  Now, it’s time for something more complicated. 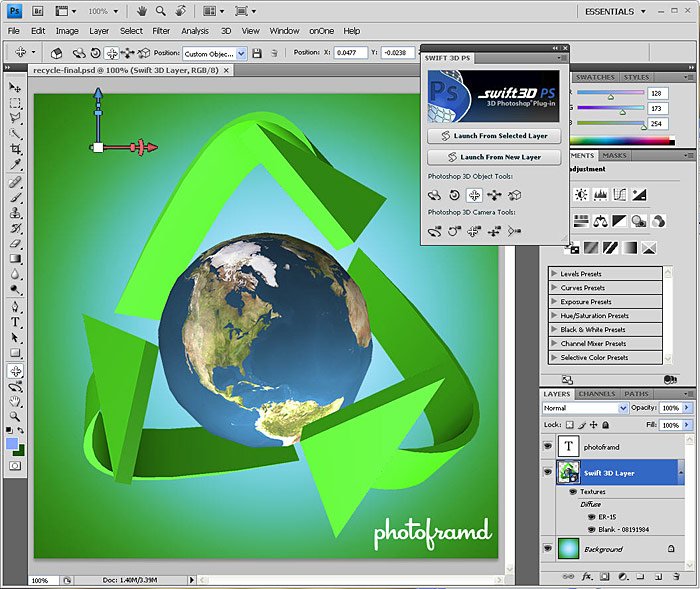 1. Start a New Document with a new Swift3D layer and the first Extrusion 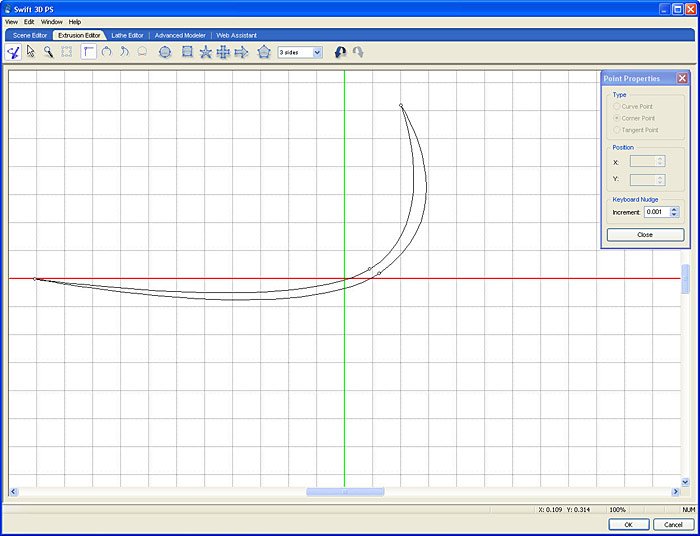 You can jump around the different editors in Swift3D PS, by using the top tabs.  To create custom shapes, you will need to get familiar with the Extrusion Editor located at the second tab.  Basically, you will use the Pen Tool to create the outline of a cross section of the desired object.  This outline will then be extruded to a 3D shape.

I am going to start with the base of the first arrow.  The arrow base has a bend which curves over itself.  With the shape drawn, I then clicked back to the Scene Editor. 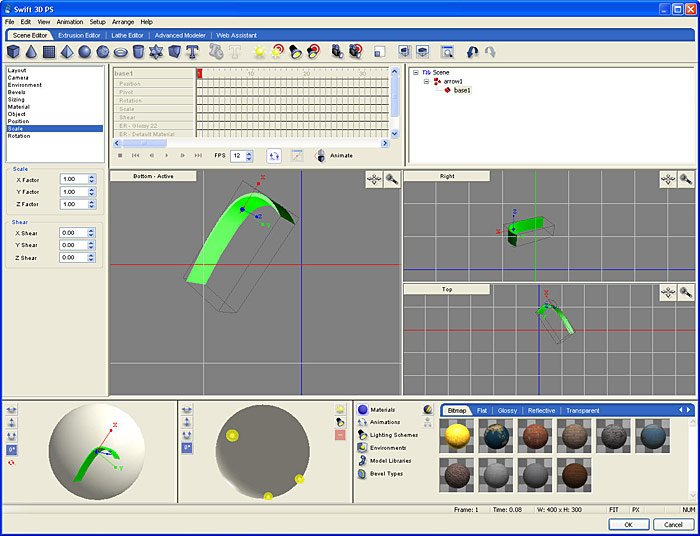 Click on the arrow base and then click on Scale in the Properties panel.  By using Scale, you can adjust the dimensions of the extruded object.  Also with the object selected, you can use the 3D Rotation Ball to rotate the object into the approximate place. 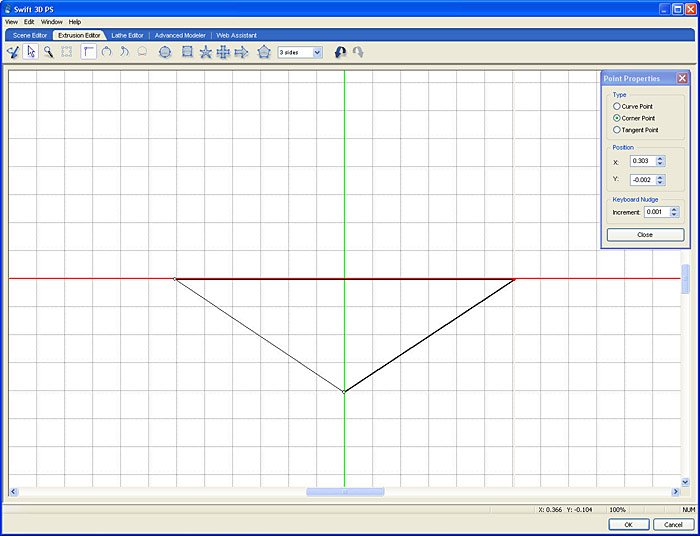 The arrow tip will also be created using the Extrusion Editor.   Using the Pen Tool again, I created the outline of a triangle and then clicked back to the Scene Editor.

4.  Extruding the arrow tip and positioning it 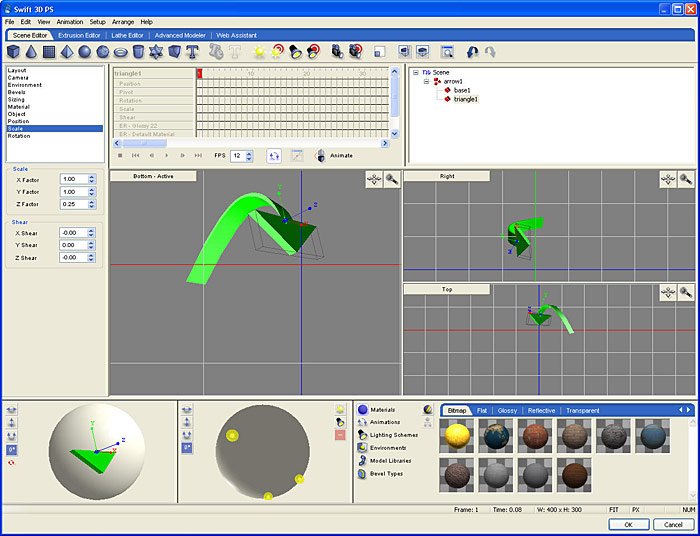 The arrow tip needs to be extruded with a narrow depth.  By clicking on Scale in the Properties panel, I set the Z-factor to .25.  The with arrow tip selected, I then moved the arrow tip to the approximate location near the base and used the 3D Rotation tool to match the arrow base.  I used the alternate views to check the alignment of the objects.  You can zoom in closer using the Magnify tool in each view window.  With the arrow in place, I selected both the tip and the base and named it arrow1 in the Scene panel.

5.  Duplicate the arrow and reposition 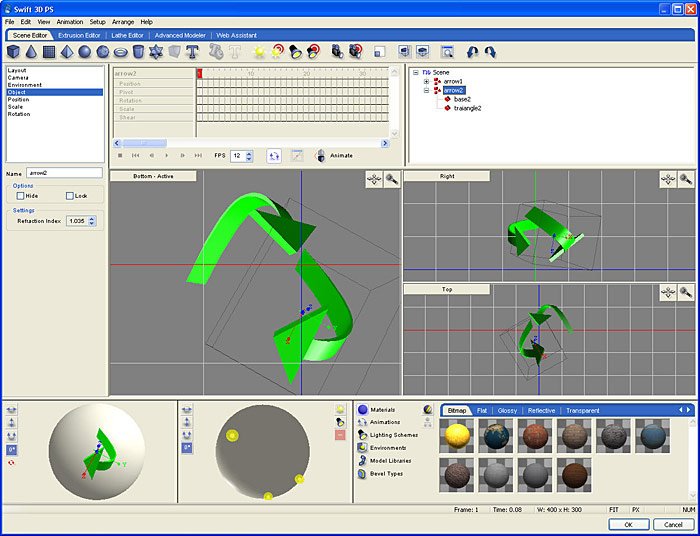 By clicking on arrow1, I can duplicate the group by selecting Copy and Paste from the Edit drop-down menu.  The second arrow will appear in the exact location of the first one.  Using the 3d Rotation tool, I positioned it into the approximate place.

6.  Duplicate the second arrow and position it 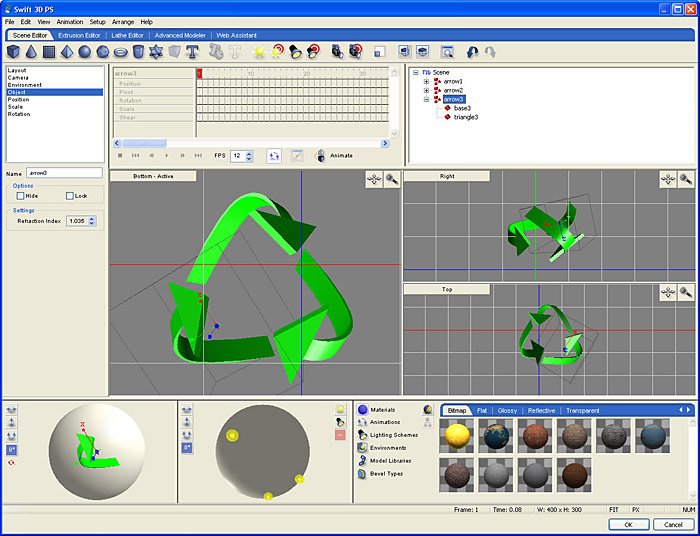 I repeated Step 5 with arrow2.  Now with all three arrows on screen, I can arrange them to form the shape of the recycle triangle.  The space in the center needs to be large enough for the last object. 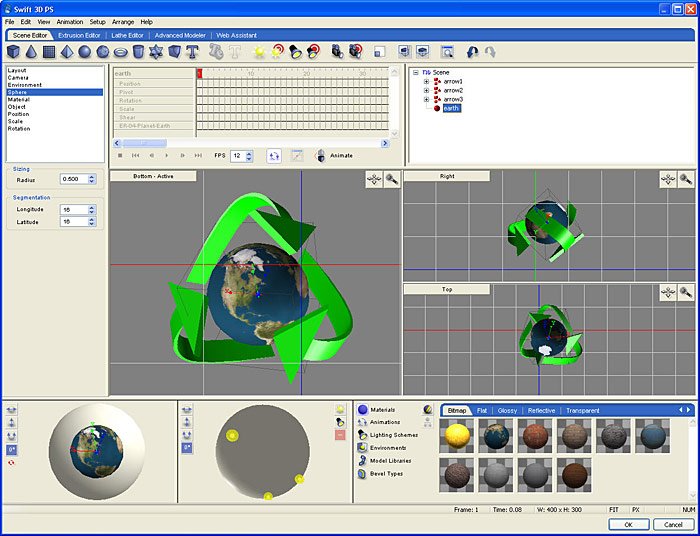 Believe it or not, creating the Earth was the easiest part.  I used the Sphere Primitive from the top menu and sized it to fit the center of the triangle.  Creating the texture on the sphere is just as easy.  Swift3D comes preloaded with Bitmap Materials and the second one in the list is an Earth texture.  I just dragged it to the sphere and I am done.

One last touch, I adjusted the Lights to be sure that there was good detail on all objects.

Back in Photoshop, I changed the 3D View to Front and sized the completed objects to fill the Photoshop Layer.  Just a quick gradient for the background and I am done. 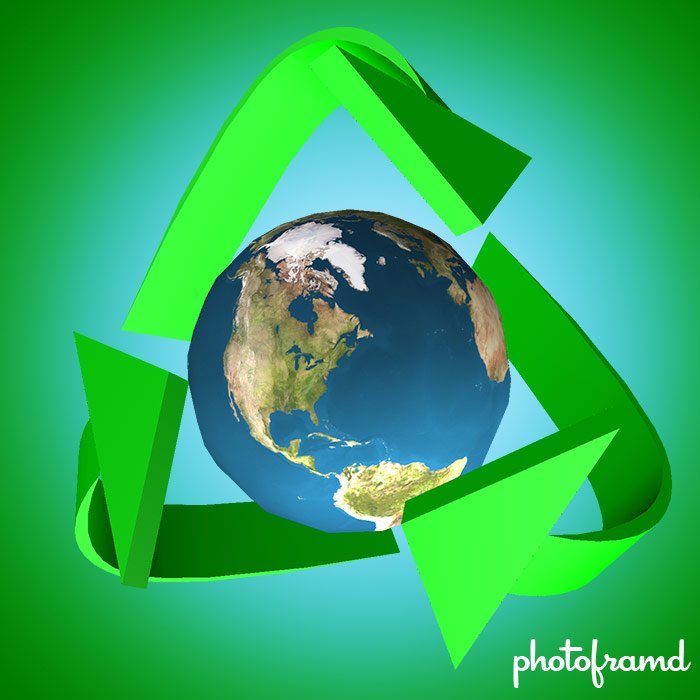