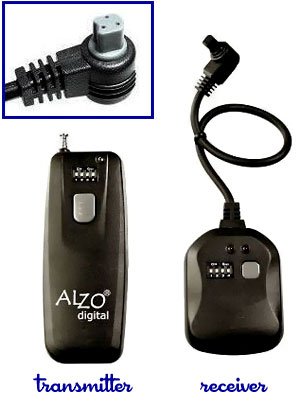 Every so often, I find the need for a wireless shutter release.  Usually, I am outdoors and need to set something up.  Or, my camera is outdoors and I am staying warm inside  😉

I remember looking for a wireless shutter release a few years ago.  Canon offered the LC-5 for about $500!  I made due without it.  About a month ago, I needed one again.  Canon still offers the LC-5 at the same $500 price tag.  But, this time I start to look around for non-Canon options.  I just needed to make sure that the shutter release fits Canon’s on-camera socket.  (Yes, different camera brands have different mounts!)

I found a few on the B&H website in the $100 price range.  Better, but still too high.  I also started reading reviews of different models, and purchasers seemed to like RF models better than Infrared models.  The reviews said that the Infrared models needed to be in “line of sight” when used outdoors while the RF models claimed a distance of 300 feet.

I next went to Google and found the Alzo Wireless Shutter Release on Amazon.  It was an RF model with a 300 foot range and available in a Canon EOS mount (as well as Canon Rebel, Nikon, Fuji and Sony mounts).  Best yet, it was only $43 and it shipped through Amazon Prime!!  There were two 5-star reviews and two review by people that received the wrong mount.  Still, it was Amazon Prime, so I figured it was worth a shot (wireless shot…).

I have been using it for about a week now, and it does perform very well.   The receiver mounts to the camera and dangles.  It can be secured with some gaffers tape or even a rubber band to prevent blowing in the wind.  The transmitter has one button and a two-stage LED.  Push the button half-way to autofocus the camera (green light).  Push the button all the way to release the shutter (red light).

Unless the camera is set to manual focus, I found that you need to follow this two-step process.  If the camera can not get an autofocus lock, it won’t take the picture (that is Canon’s programming).  The receiver will continue to send a shutter release command and basically lock-up the camera for a minute.  But, following the green light/red light process works great.

The range is very good.  Since the receiver has LED lights, it helps to see the light confirmation at a distance.  So far, my $40 investment has proven to be a great bargain!