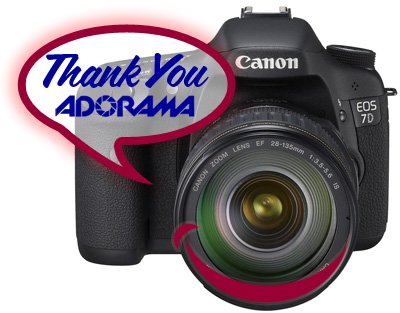 Today is a great day — I am picking up my Canon 7D today at Adorama.  But, that’s the end of my story.

I have been excited about a secret camera Codenamed: Lord of Darkness since it was leaked on CanonRumurs.com.  Canon eventually named this prosumer camera the 7D.  Last week, CanonRumors said to expect the 7D in US stores this week.  Yeah!

Since I usually pick the last store to receive an item, I hate pre-orders.  So, I thought I would try an experiment — use Twitter to track down an available 7D for purchase.  More business are using Twitter to stay connected with their customers, so it seemed like a great test.  Is Twitter ready for business?

With almost 9000 Followers on Twitter, I have a great audience which happens to include most of the top camera stores in the US including Adorama, Abes of Maine, B&H Photo, Cameta Camera, Calumet, J&R, OneCall and Unique Photo.  On Sunday, I decided to send each of them a Direct Message through Twitter saying that I would like to purchase a 7D Body w/ BG-E7 Grip ASAP.

Most of the NY stores were closed on Monday for Yom Kippur.  But, on Tuesday morning, I received DM responses from Adorama, Abes, and J&R saying that they would check stock and let me know.  Each of these companies really use Twitter for business … pretty cutting-edge.   I was getting excited!

But, by Tuesday afternoon, Abes and J&R indicated that they were not expecting 7D until next week.  And, I finally received a response from B&H which said they were filling their pre-orders first and that I should have placed an pre-order.  Oy Vey!

How Badly Do You Want It?

Now on Tuesday, I was supposed to be scouting Fall foliage locations on Long Island.  Also on Long Island is Cameta Camera, an ebay Powerseller which is usually very competitive with the NY sellers.  By this point I was ready to give-up on Twitter and give Cameta a old-fashioned phone call.  Sure enough … they had just received the 7D and were not taking pre-orders.  I spoke with Todd who said that “if you can get here within an hour, you can buy one!“

I rushed down and had a boxed 7D in my hand!  I handed Todd my credit card and he was ready to ring-up $1899 for the 7D Body.  I stopped him.  That was $200 OVER Canon’s suggested list price. When I pointed that out, Todd replied that “$1899 was the price in the computer.”  But, that was $200 OVER Canon’s list price!  This went on for a few minutes with my volume increasing which each volley.  Over in the corner just listening to this spectacle was Mr. Cameta himself.  He was obviously aware of the $200 surcharge and was content to let this play out.  Pretty sleazy for an Authorized Canon Dealer, Mr. Cameta! I left without the 7D.

The Surprise – Adorama to the rescue!!

Still annoyed and now very disappointed, I just flipped through my new emails and Tweets on my Palm Pre.  And, there it was … a Tweet from Adorama saying that they had just received the 7D and wanted to know if I still wanted one! Just a few more Tweets and I was speaking with Joel M to finalize my order!  And yes, I was charged the correct $1699 for the 7D Body!

My whole experience with Adorama was a pleasure. During the same call, I also spoke with Efriam at Adorama to answer some Canon-specific questions about shooting video on the 7D.  I was very impressed.  Once I decided on a memory card and an external mike, Joel popped back on to finalize the order.  He even emailed me a quote to confirm the prices.  I never would have expected such personalized service from a NYC store.

UPDATE – Part 1: I am charging the battery as I write this.  The whole experience with Adorama was very positive.  I met both Joel and Efraim in person and they could not be nicer.  I also walked the store talking to different people in each of the departments.  Each person welcomed questions even if you were not an immediate buyer.  Adorama treats each customer with respect.  I was very impressed.

UPDATE – Part 2: Soon after I posted this article, I receive Direct Messages through Twitter from Abes of Maine, J&R and Unique Photo all wishing me well with my new 7D.  A very classy touch!  It definitely shows that these companies care about maintaining good rapport with potential customers.

UPDATE – Part 3: I am very happy with the results of my Canon 7D Twitter Quest.  It shows that business can use Twitter to reach out to potential customers and help them make their desired purchase.  Not all businesses are ready for this step.  But, if a business already uses email to communicate with customers, then the door should be open for Twitter.  Whether it is Direct Messages or plain old Tweets, Twitter is an important new form of communication which businesses should use to find new customers and stay in-touch with existing ones.