Turning a static picture into a “motion” picture seems pretty basic for a Photoshop pro.  But, what about doing it realistically?  If you have ever watched traffic (in Times Square or elsewhere), you would know that all of the cars move at different speeds.  That’s real traffic.  Cars closer to the camera will seem faster than cars further away.  That effect can be simulated if you plan it out. 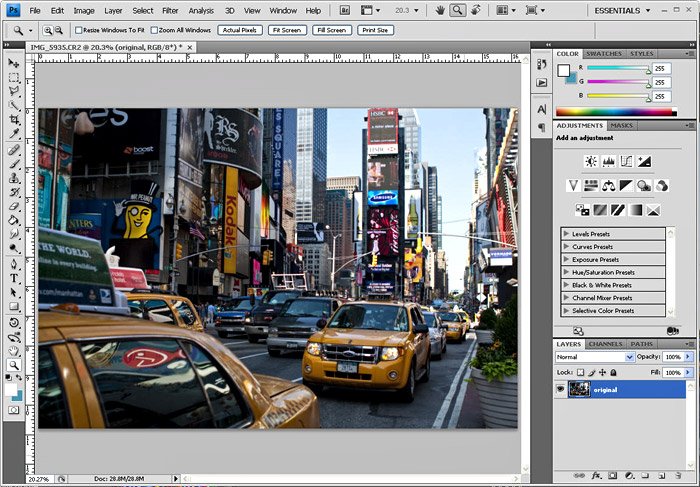 My original photo is crisp.  The cars were stopped at a light.

2.  Duplicate the layer and apply a Motion Blur 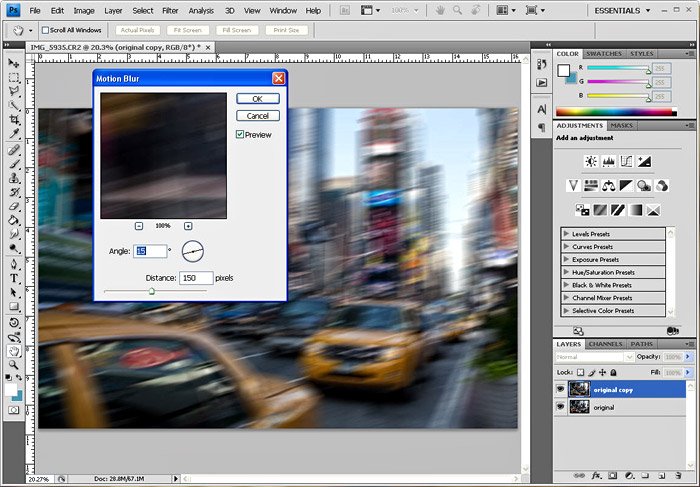 I never apply effects to my only layer.  Get into the habit of duplicating the layer just in case you need it later.  On the duplicate layer, I go to Filter > Blur > Motion Blur.  It is important to set the angle of the blur to match the intended movement in the photo.  A 15 degree angle looks to match the direction of the traffic and a distance of 150 pixels will create a nice long blur.

3. Add a Layer Mask and fill it with black 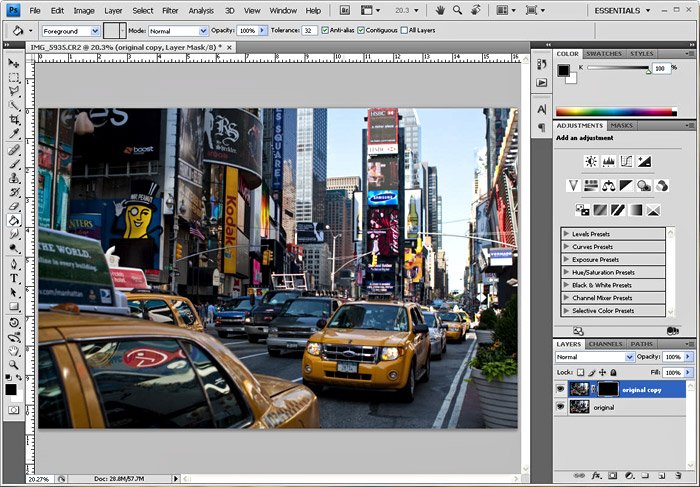 Only the cars are moving, so showing blur on the buildings does not make sense.  I added a Layer Mask to the blurred layer and filled the Mask with pure black.  Remember, pure black hides, pure white reveals and degrees of gray show the various levels in between. I am next going to selective reveal the blur by painting in the Mask Layer.

4. Start painting in the Mask Layer to reveal the blur 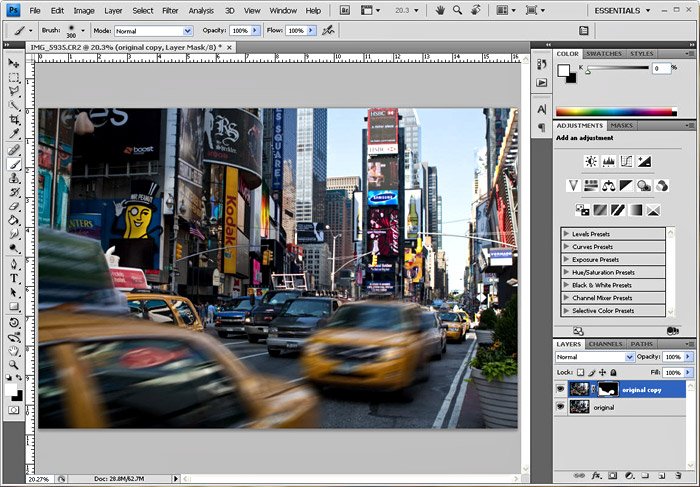 With the Layer mask selected, I used a 300 pixel brush with a soft edge and pure white paint to reveal the blur on the closest two taxis.  These two taxis will have the full blur effect.

5. Reveal the next group of cars 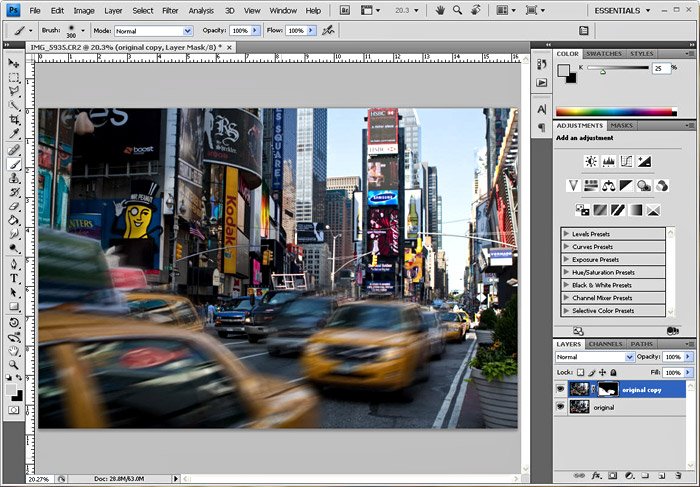 The next group of cars are further away from the camera and should appear slower than the first group.  By changing the color of the brush from pure white to a light gray (R204/G204/B204), I will reveal less than the full blur effect.

6.  Reveal the final group of cars 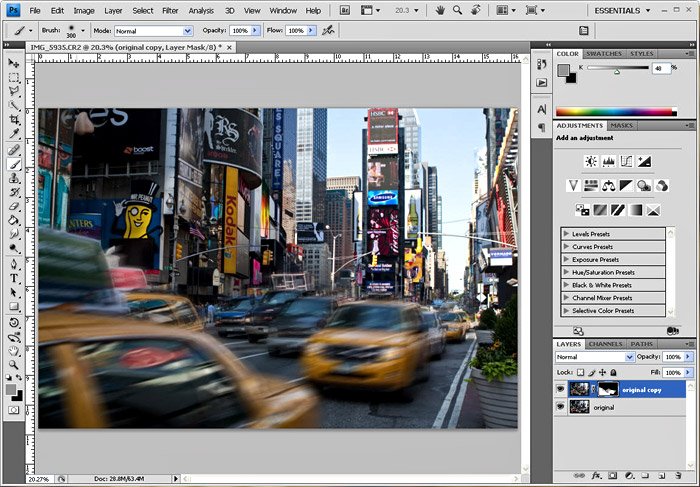 The final group of cars are the furthest way and should appear moving the slowest.  By changing the color of the brush to a medium gray (R153/G153/B153), I will reveal even less of the blur effect.  You can now see a clear distinction of speed. 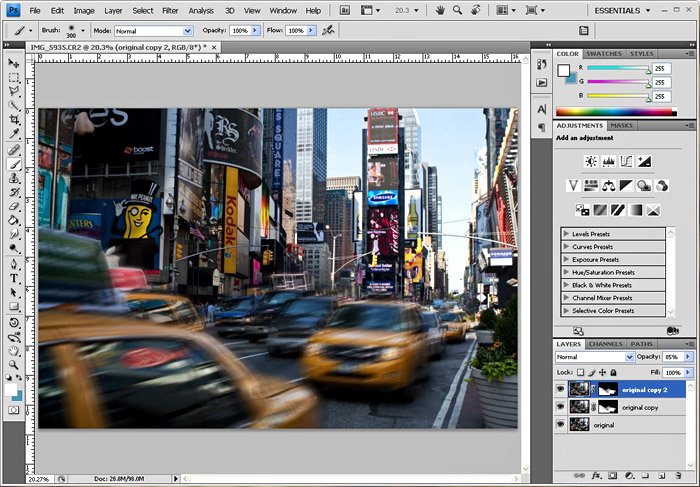 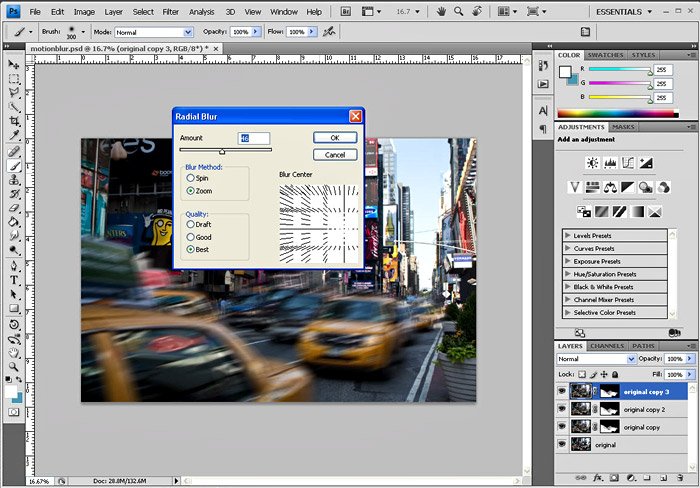 What is a motion blur without some streaks??  I duplicated the original blur layer and dragged it to the top of the layer stack.  With this layer selected, I went to Filter > Blur > Radial Blur.  I changed the direction of the blur by clicking in the Blur Center area and moving it to match the flow of traffic.   I changed the Blur Method to Zoom and the Blur Amount to 46 and applied the effect.

9. Apply the streak to only select cars 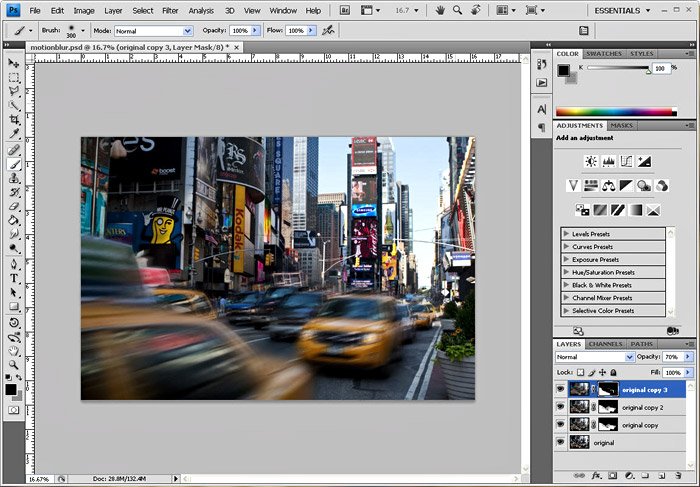 To further emphasize the streaks, I then clicked on the Layer Mask of this same layer and reapplied the Radial Blur filter with the same settings.  I wanted to limit the streaks to only the fastest taxis, so I painted in the Layer Mask with pure black everywhere except the first two taxis.

The final result has a very natural motion effect.