I am getting tired of reading about critics bashing the Canon 7D for its crop factor.  Most seem to associate a cropped sensor with digital noise.  This argument did not exist before Canon’s marketing campaign created the relationship to promote the Canon 5D Mark II.  But, let’s look at some numbers.

From the above diagram, you can clearly see that the 5D Mark II sensor is much bigger that the 7D sensor.  Yet, Canon does cram 18 megapixels into that smaller space. 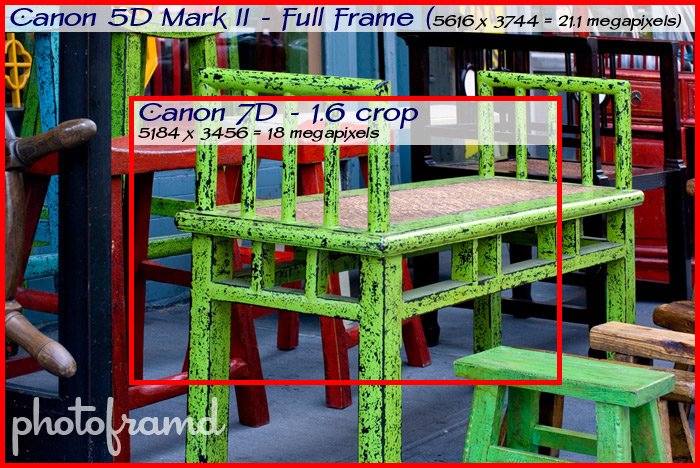 In actual use, shooting the same subject from the same location would yield the results depicted in the above image.  If the 5D Mark II’s view represented the full frame’s image, then the 7D would capture a much smaller image area.  That’s where the 1.6 crop factor comes into play.  The crop factor magnifies the lens’ focal length so a 35mm lens on the 7D captures the equivalent area of a 56mm lens on a full-frame sensor (35mm x 1.6 crop = 56mm lens equivalent).

But suppose you only wanted to capture that smaller area?

For the 5D Mark II to capture the same smaller area, you would need to either:

Cropping is the easy answer. But, what does that REALLY accomplish? 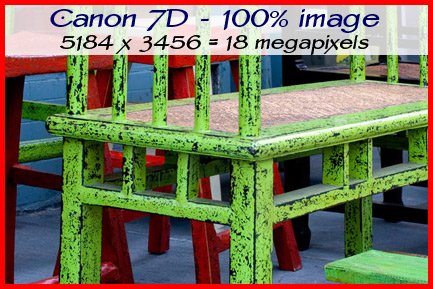 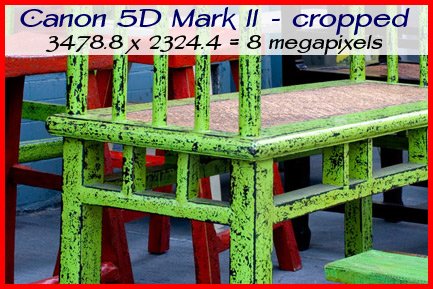 Personally, after using a camera with a crop factor for over 5-years, I would find it hard to go back to a full-frame sensor. I love the extra magnification created by the 1.6 crop! Boosting a 400mm lens to an “equivalent” 600mm is awesome!  And, considering it is cheaper to buy extreme wide-angle lenses (ex. 22mm lens) than an extreme telephoto lenses (ex. 600mm lens), it is very easy to adapt to the crop factor.

So, don’t knock my 7D for its crop factor. That argument does not hold megapixels.

NOTE: A few readers have commented about the old argument for Depth of Field on a crop sensor.  You can read the discussions below. But, let me be clear – that argument is just wrong.

Ken Rockwell stated “The lens isn’t actually changing its focal length, so the depth of field remains the same. The image formed by the lens is unchanged regardless of the camera behind it.”  To be even clearer, Bob Atkins stated “If you use the same lens on a Canon APS-C crop sensor camera and a 35mm full frame body and crop the full frame 35mm image to give the same view as the APS-C crop image, the depth of field is IDENTICAL.”

So, I am not the one trying to mislead others.  It is the people trying to sell full-frame cameras.

My Full Year with the Canon 7D

Canon 7D Tips – What should my first lens be?

Canon 7D Tips – Shooting both Stills & HD-Video with One Camera