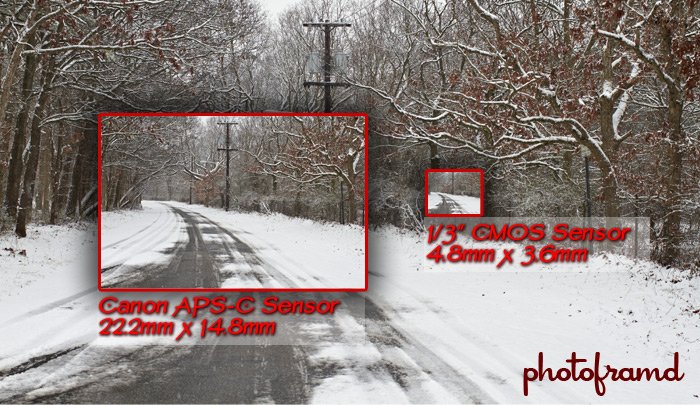 With all the talk about using DSLRs for HD Video, there are a lot of very confused consumers.  Should I buy a really good camcorder or should I put all the money into a DSLR like the Canon 7D?  It’s not as easy an answer as you may think.  There are basically three factors to consider:

1.  Image Quality. If your utmost concern is image quality, then the choice is easy.  A DSLR is by far the winner in the image quality contest.

Just look at the comparison of the sensors above.  The Canon APS-C sensor is 22.2mm x 14.8mm while your typical 1/3″ CMOS Sensor is only 4.8mm x 3.6mm. Sure, both sensors can produce 1920 x 1080p Full HD Video, but the smaller 1/3″ CMOS sensor must interpolate the hell out of the image to stretch the image up to achieve it.  Instead, the Canon APS-C is capable of capturing 5184 x 3456 pixels, well beyond the 1920 x 1080 HD video image size.  The Canon image is actually reduced to the smaller image size.  Reducing an image will always have better image fidelity and sharpness than expanding an image.  Anyone that has fooled around with Photoshop can attest to that!

Now, think about the size of the lens in both the DSLR and the camcorder.  The optic on the DSLR is much bigger because it is designed to capture photographic images.  Put a Pro lens on the front and you now have superior optics which can capture more light and produce sharper images.  Think of DSLR video as really moving pictures.

Lastly, think about image quality during low-light performance.  The Canon 7D has dual DIGIC IV image chips processing the image at all times.  Combine that big sensor with the big optic and processing horsepower and its no wonder why the Canon 7D was code-named the Lord of Darkness.

2.  Autofocus. This factor can also be a deal breaker.  If you need to have continuous autofocus, there is no choice but a camcorder.

Camcorders were always designed to capture video. As a subject moves, camcorders can easily autofocus to keep them sharp.  This is not true for DSLRs.  AI Servo and AI Focus modes work for still photography not video.  With the Canon 7D, you can force the camera to autofocus on a subject while recording video by pressing the shutter half way.  But, this most likely will cause the camera to “hunt” for focus, fading out of focus before locking on the subject.  If you have ever seen the elaborate rigs by Redrock Micro and Zacuto for the Canon 7D, they include something called a “focus puller” which makes it easy to manually focus the lens while shooting video.

Now, in real world use, most scenes will be shot using one focus point.  A change in focus will usually mean a cut-scene unless the camera is following the action.  It is an easy work-around — autofocus on the subject, shoot the video, stop and recompose, autofocus again, start shooting video again.  It’s more like shooting still pictures and it works!

3.  Image stabilization. Both DSLRs and camcorders can handle jittery camera movements to a degree.

With camcorders, the image stabilization is built into the video camera.  It is also designed for movement while shooting video.  DSLRs like the Canon 7D have image stabilization built into the lens, but not all lenses have IS (Image Stabilization).  I have been using my 15-55mm IS EFS lens more and more over my favorite 24-70mm L lens just because of the added image stabilization.  But, even this IS is not as good as the image stabilization built into most camcorders.  Most DSLRs will stabilize horizontal and vertical movement (which would be most common problems for still photography.)  Camcorders can also take into account the speed of camera movement during stabilization.  Only Canon’s new Hybrid IS, available in the new 100mm Macro L lens, can also compensate for acceleration speed.  Considering Canon just announced the update for their 70-200mm f/2.8 IS L lens (one of their biggest sellers), it will be very interesting to see how the new IS lens performs for video.

So there you have it.  Do you want to shoot HD video with a DSLR or with a camcorder? Consider these three factors and decide for yourself.  But, if Image Quality is the most important factor, chances are you will decide on a DLSR like the Canon 7D.

For sample video shot with the Canon 7D, please take a look a my YouTube Channel and my Vimeo Channel.