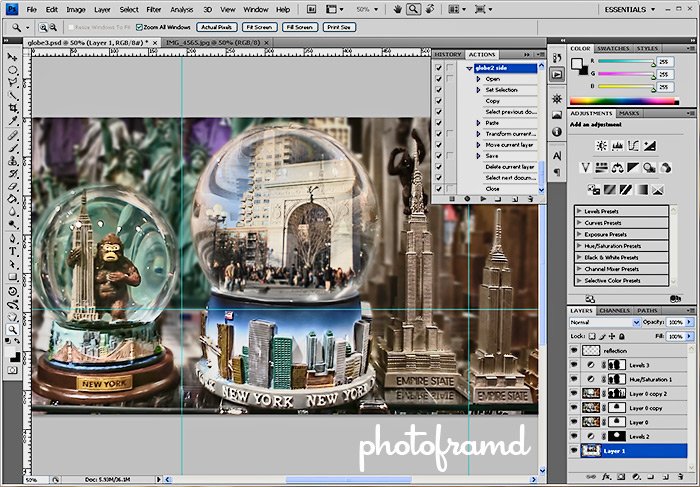 In my last article on time lapse videos, I mentioned that you could use Photoshop to manipulate each image before they are imported for the video.  For my latest video, Snowglobe, I thought I would really push to see how far I could go. 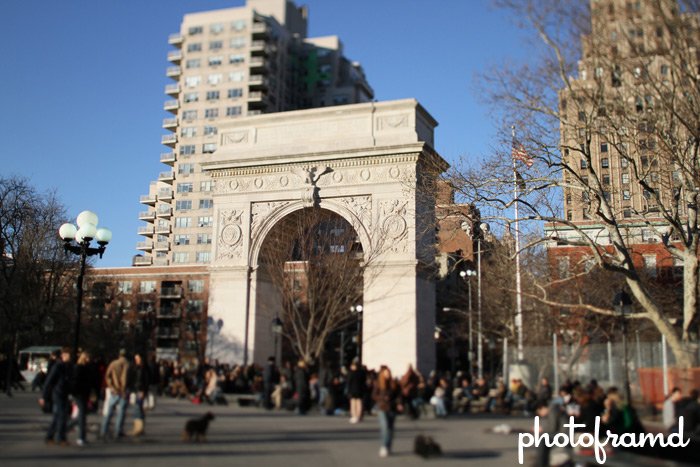 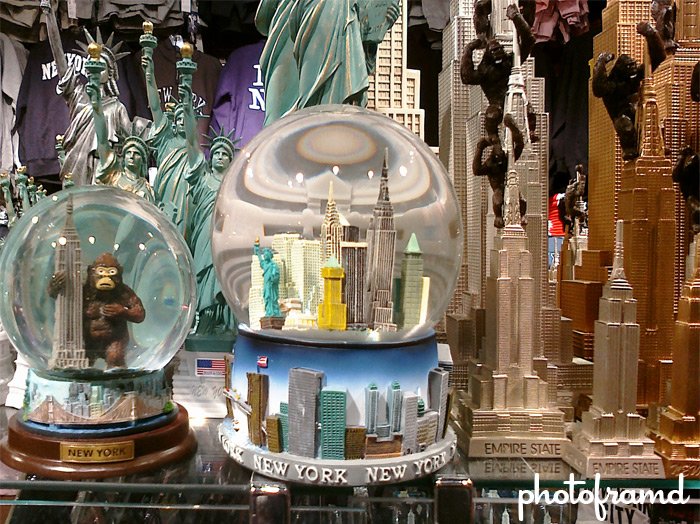 When I shot the photos of Washington Square in New York City, I used my Canon 7D with the 24mm TS-E L lens to create the tilt-shift miniature effect.  Because of the angle, I thought it would be fun to create a composite scene to re-enforce the miniature effect.  Walking around NYC, I found the above shelf of souvenirs and thought it was a perfect match.  Unfortunately, I did not have my 7d on me.  Instead, the above photo was taken with my Palm Pre (yes … my Palm Pre!)  I thought the souvenir photo had great detail but was too busy for the time lapse video.  So, I manipulated the photo in Photoshop CS4 to blur and desaturate the background objects to keep the focus on the snowglobes in the foreground.

Once I was happy with the revised image, I added an alpha mask to knock out the contents of the snowglobe.  My goal was to import the tilt-shift images behind the souvenir photo.  One is easy enough, but to create consistent results with over 500 images?  That’s where Photoshop Actions take over. 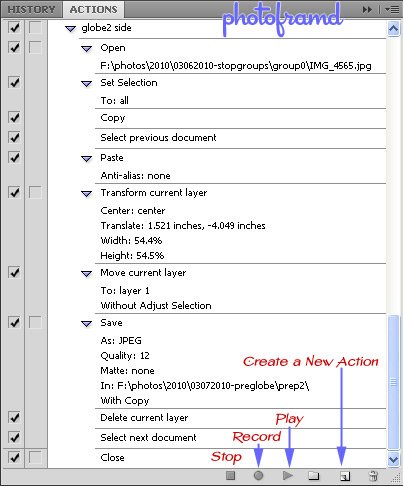 Photoshop Actions allows you to record the steps to create an effect in Photoshop and then play it back to recreate the effect at another time.

Whenever I use Actions, I experiment with the technique a few times before recording the steps.  Action records the exact steps, so it is important that they are correct and will work with other images and files.  In this example, the tilt-shift photos will need to be sized and positioned exactly.  So while experimenting, I created Guides to follow later when I am actually recording the steps.

The screen capture to the right contains the actual steps which I used to batch the Snowglobe images.

With the Actions palette open, I clicked the New Action icon and named it globe2 side.  With the Record icon glowing red, I started the recording the following steps:

1.  I opened the first tilt-shift photo in a new tabbed Photoshop window.

2.  I copied the entire photo (Control-A or Command-A)

3.  I switched windows to the souvenir Photoshop file.  Clicking below the bottom layer, I pasted the entire photo as a new layer (Control-V or Command-V).

4 & 5.  I transformed the image’s size and placement according to the Guides which were previously created while I was experimenting.

8 & 9.  Finishing up, I switched windows again to the opened tilt-shift photo and closed it without making any changes to it.

With the Action in place, the final step is to use a Batch to generate all 500 images.  Under the menu File > Automate > Batch, you will see the following screen. 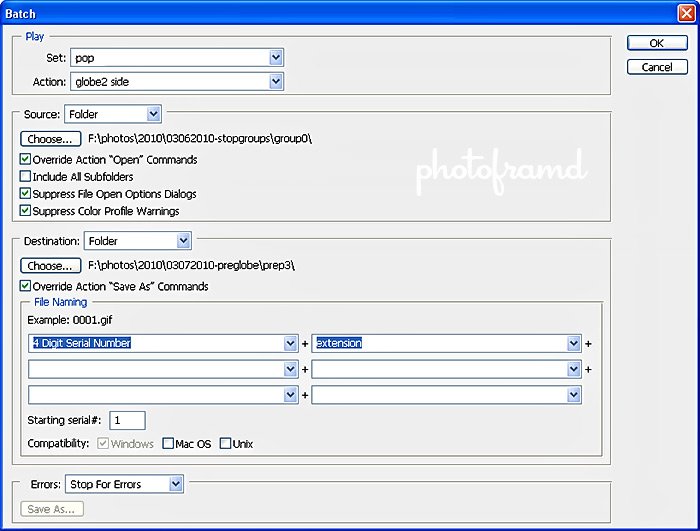 Under Play, I selected the new Action called globe2 side.

Under Source, I selected the folder containing all of the tilt-shift photos.

Under Destination, I selected a new folder with the Override Action “Save As” Command checked.  In saving the new file, I will have Photoshop rename the file using a 4-Digit Serial Number.

Batching is a wonderful time-saver when it works.  However, there are times when it seems to have a mind of its own.  When I run a batch, I always keep the destination folder open so that I can check the output.  If it is not correct, you can click the Stop button in the Actions palette to halt the batch.  Check the settings and then run the batch again.

I started this blog because I firmly believe that Photography and Photoshop belong together.  Photographers who learn Photoshop techniques can take their skills to another level.  And, the same is true for graphic artists who learn photography.  They are two-sides of the same coin.  This article is a great example of what the two can create together.