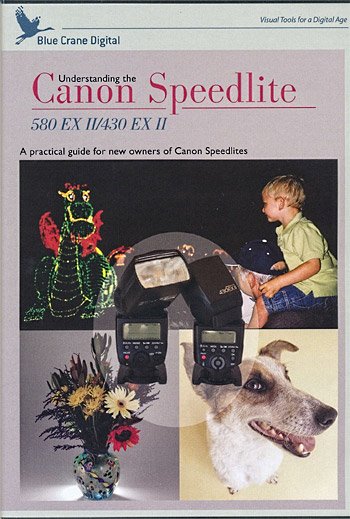 Blue Crane Digital has been producing DVD tutorials for several years.  I reviewed their new 2-volume series for the Canon 7D a few months ago.  In fact, I was so impressed with the DVDs, that I looked at the other Canon-specific tutorials.  I recently watched the 2009 update to their Canon Speedlite DVD covering the 580EX II/480EX II.

The DVD concentrates on the Canon Speedlites and how the 580EX II Speedlite works with such cameras as the Canon 5D Mark II and the Canon 50D.  Although the 480EX II is discussed more briefly with the Rebel series, the DVD does explain that many of the settings are common between the two flash units.

Blue Crane starts with the basics:

Then, Blue Crane moves to a discussion of hard light versus soft light and how it is determined by 2-factors:

From there, the DVD picks up another concept which can be tough to understand – Slow Sync Exposure and First Curtain Sync / Second Curtain Sync.

In a Slow Sync Exposure, the camera will plan on two-steps to properly expose the image.  The background subject will be exposed by the camera setting the shutter speed (and depending on the Mode, the Aperture and ISO).  The flash will be responsible for the proper exposure of the subject in the foreground.  Put both together and you produce a properly exposed image with details in the foreground and the background.  When the flash fires (when it is synced) can change the captured image.

All cameras have two curtains which are used to take a picture.  The first curtain exposes the image sensor to the image while the second curtain closes the exposure.  The flash can be timed for either curtain to produce different results.  The typical example is a car on a dark street with its headlights beaming:

Here again, the DVD does a great job at explaining these concepts.  With these basics in place, the DVD then covers the specific settings of the 580EX II  and the following topics:

Overall, the Blue Crane Understanding the Canon Speedlite 580EX II/430EX II is a great DVD to demystify the Canon flash series.  It is perfect for someone who gets bogged done with manuals.  My only disappointment was that it did not also include references to the Canon 7D and its wireless flash controls.  However, this topic is thoroughly covered in 2-volume Canon 7D DVDs.  In fact, if you are a Canon 7D owner, you should start with the 7D-specific DVDs. Then, if you want additional information about the Speedlites, think about the Speedlite-specific DVD.