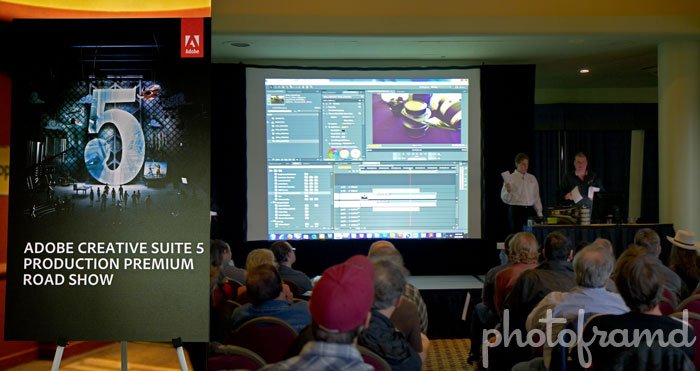 Adobe is doing something extra special with the release of CS5.  It is holding CS5 Road shows in 7-cities around the US cities.  The first show was held in New York City on May 18th at the Hotel Pennsylvania featuring Premiere CS5 and After Effects CS5.

The CS5 Roadshow started with a dynamic video promoting the Open Screen Project to put Flash everywhere.  And, sprinkled throughout the presentation were digs at Apple (very funny 😎 )  The Roadshow focused on the new features in both Premiere and After Effects as well as the new editions to the Production Premium Suite like Adobe Story and Adobe OnLocation.  There was also a review of the new features in the Photoshop and Illustrator.  So, if you want to see CS5 up close and personal, look for the next Roadshow in Orlando, Dallas, Atlanta, Vancouver, San Francisco and Los Angeles.

One of the Roadshow’s presenters, Dave Helmly is a regular on Adobe TV.  In this segment, he is talking about the new Mercury Playback Engine in Premiere CS5.  Seeing this demoed in person (on a fully-loaded HP z800 workstation with a Nvidia Quadro FX 4800 graphics card) was very impressive.

The other presenter was Karl Soule who discussed After Effects CS5, as well as, the other new features throughout the CS5 Suite. Karle is another regular from Adobe TV and can be seen here demoing the new Rotoscoping Abilities in After Effect CS5.

During the breaks, the Partners at the Roadshow were demoing various products:

Several companies offering After Effects plugins were also there:

But, the best part was the give-aways at the end.  The top prize was an Nvidia Quadro FX 4800 worth over $1500.  The clueless winner elicited a roar of laughter from the crowd when he asked if it would work in his iMac.  It was a great way to spend an afternoon.