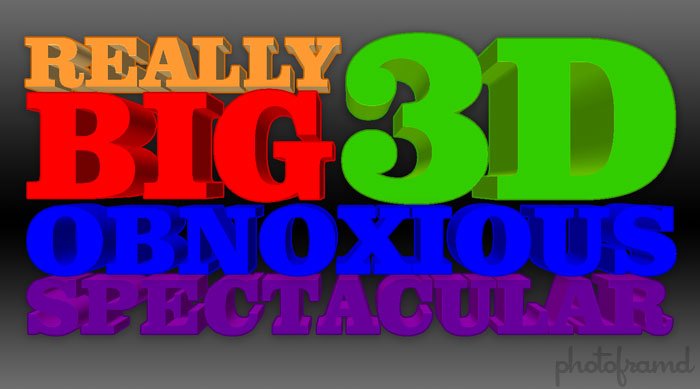 While the 3D capability added in Photoshop CS4 was functional, it was not very user-friendly.  In fact, last year I stated that you were better off using Electric Rain’s Swift3D plugin for a true 3D creative environment.  (My original 4-part series on Swift3D starts here.)  So, I was excited to hear about the new Repousse 3D feature added to Photoshop CS5 Extended. While it is an improvement, it still has a ways to go.

1.  Repousse may work with Text, but not Illustrator Text. 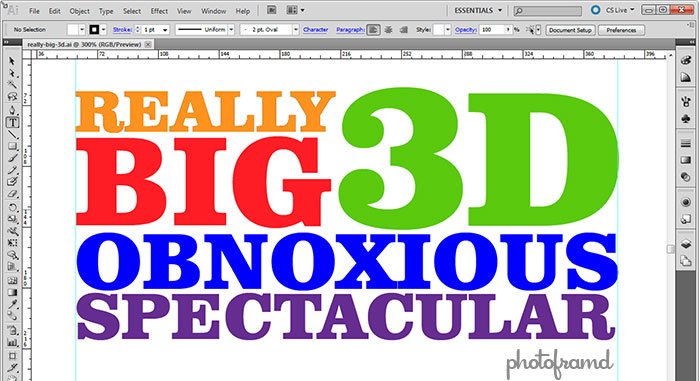 Repousse has been touted as working very well with Text.  So, as most designers, I started by laying-out my text in Illustrator CS5.  After all, Photoshop and Illustrator work very well together.  (And no, I did not fuss with the kerning … I just wanted to create a nice block of text for this demo.) 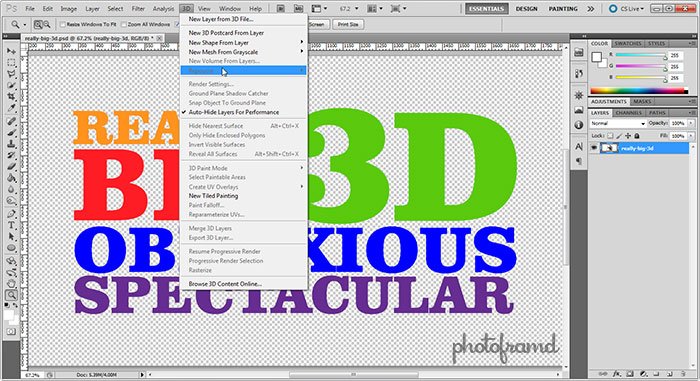 I tried importing the Illustrator file as a Smart Object and found the Repousse was not available.  I even tried placing the file and it was still not available. 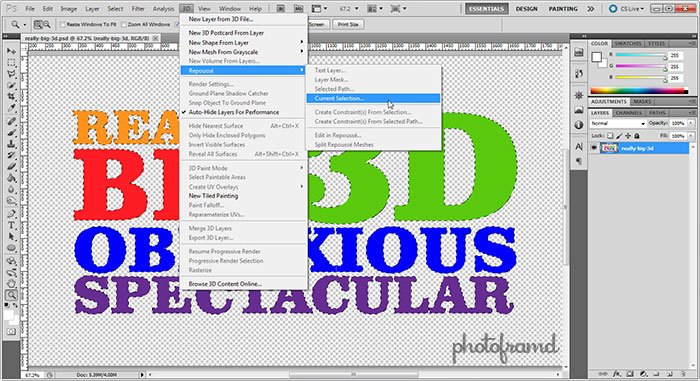 After reading about Repousse on Adobe.com, I found that it will work with a Selection.  So, I loaded the Layer as a selection and finally Repousse was available! 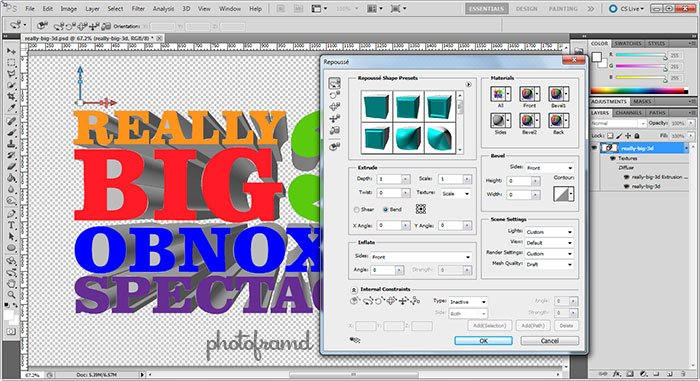 Take a look at the above screen shot.  First, Repousse did not pick-up any of the colors used in the Layer.  It only used the selection path.  And, even that was not handled very well.  Look at the letters B, O, R and A.  They are all filled in!  I even tried Rasterizing the Illustrator Text first and loading that as a selection.  However, it generated the same exact result.  Time to start over. 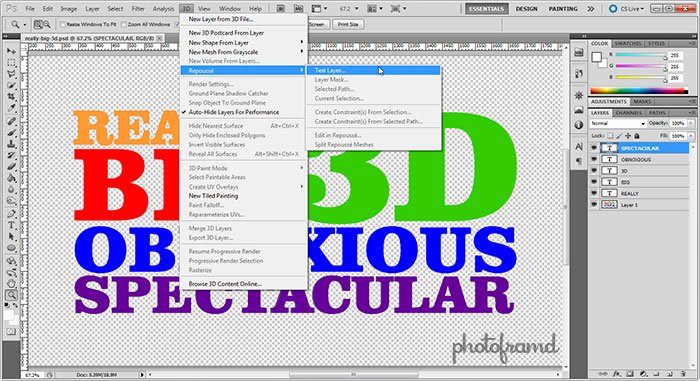 I recreated the same layout with Text in Photoshop and finally Repousse found the Text Layer. 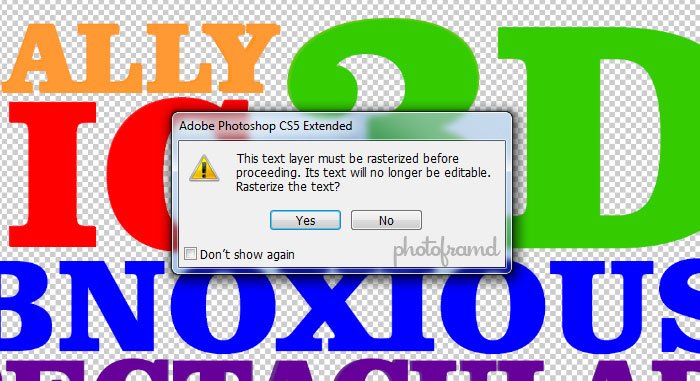 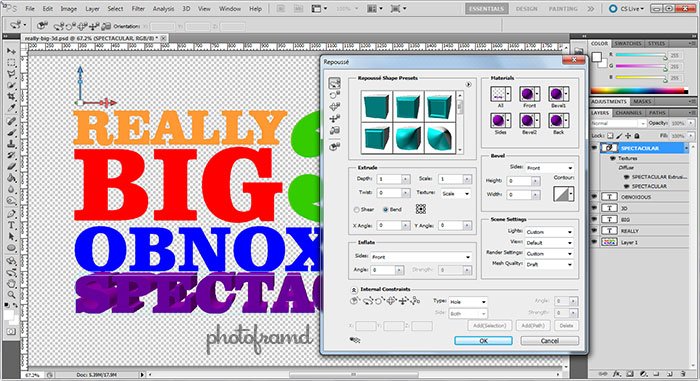 At this point, I decided to just complete the demo.  I applied the default settings to the first rasterized Text Layer.  I was hoping that Photoshop would use the relative position of the text in the window to create the 3D perspective.  Thankfully, it does.  So, I could continue applying Repousse to each of the remaining Text Layers and they would match the first-person 3D perspective.

5. Once back in Photoshop, the Layer Blending Modes are fully functional. 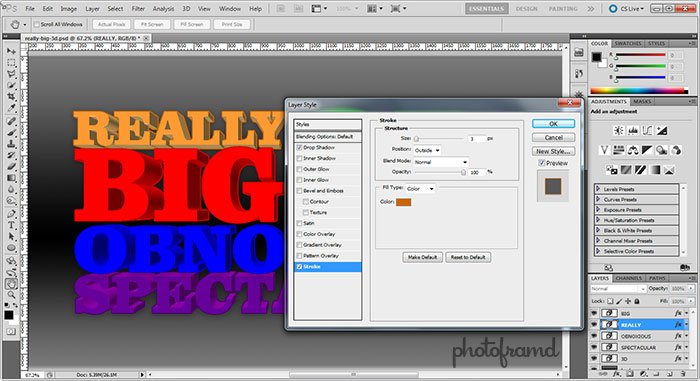 Back in Photoshop, I decided to make the 3D text pop a little more.  I opened the Blending Mode and applied a stroke picking up a color slightly darker that the face color.  This stroke was applied AROUND the 3D unit, not around each individual letter.  I also added a slight drop shadow and again the shadow was applied around the entire 3D unit.  I also rearranged the stacking order of the Layers to help complete the final 3D look.

Repousse is an improvement over the 3D capabilities of CS4.  However, it still needs refinement. I was planning on following this article with an update on Swift3D’s Photoshop plugin, but there is an issue there too.  Although Electric Rain released a 64-bit plugin for CS5, it is buggy. In fact, the file that I created using the new plugin eventually crashed Photoshop CS5.  It’s a shame because Swift3D’s interface is so much nicer than Repousse.  It is a true 3D creation tool.  I sent the file to Electronic Rain and am waiting for a response.  I will keep you posted.

I decided to take another look at Repousse using the original Illustrator file.  It turns out, you can take that file further. 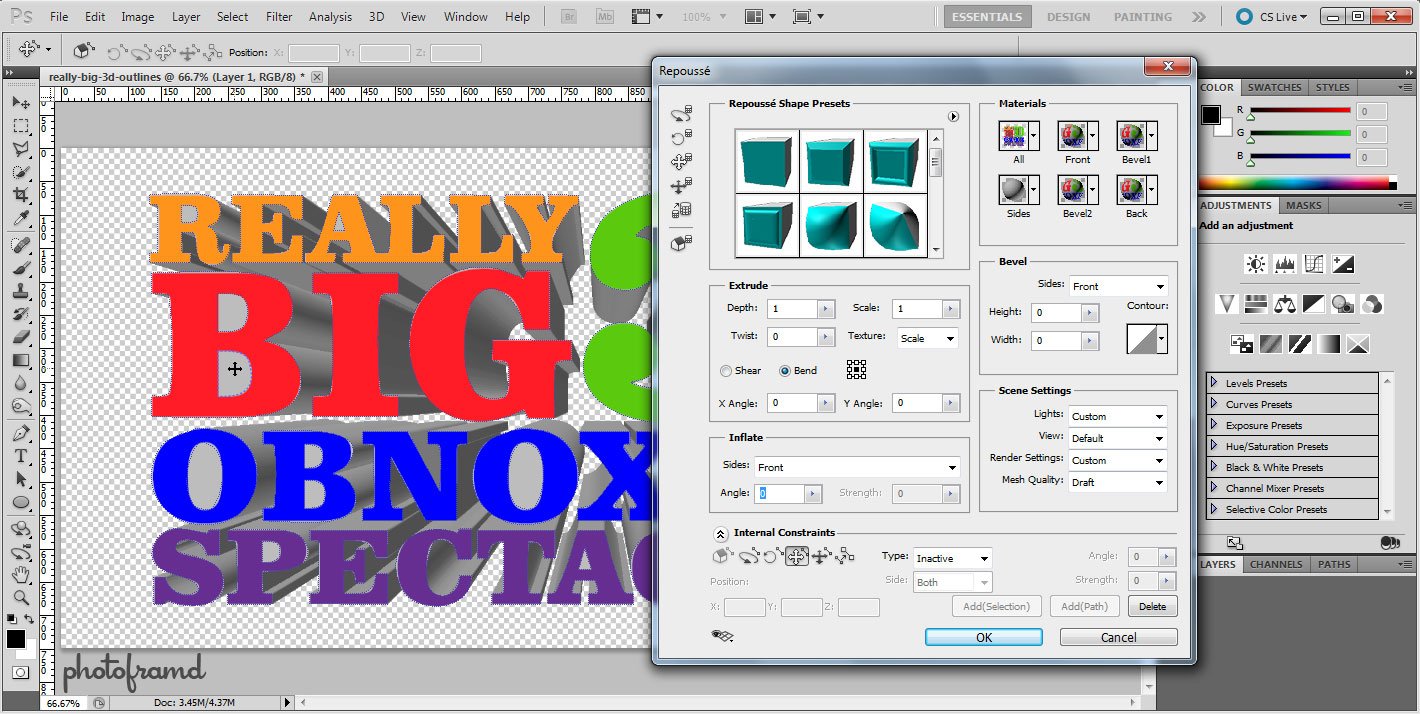 In the Repousse Panel, select any of the tools listed under Internal Constraints. With one of these tools selected, you can now hover over the filled in portions and see them respond with a dotted outline.  Click the path to select it. 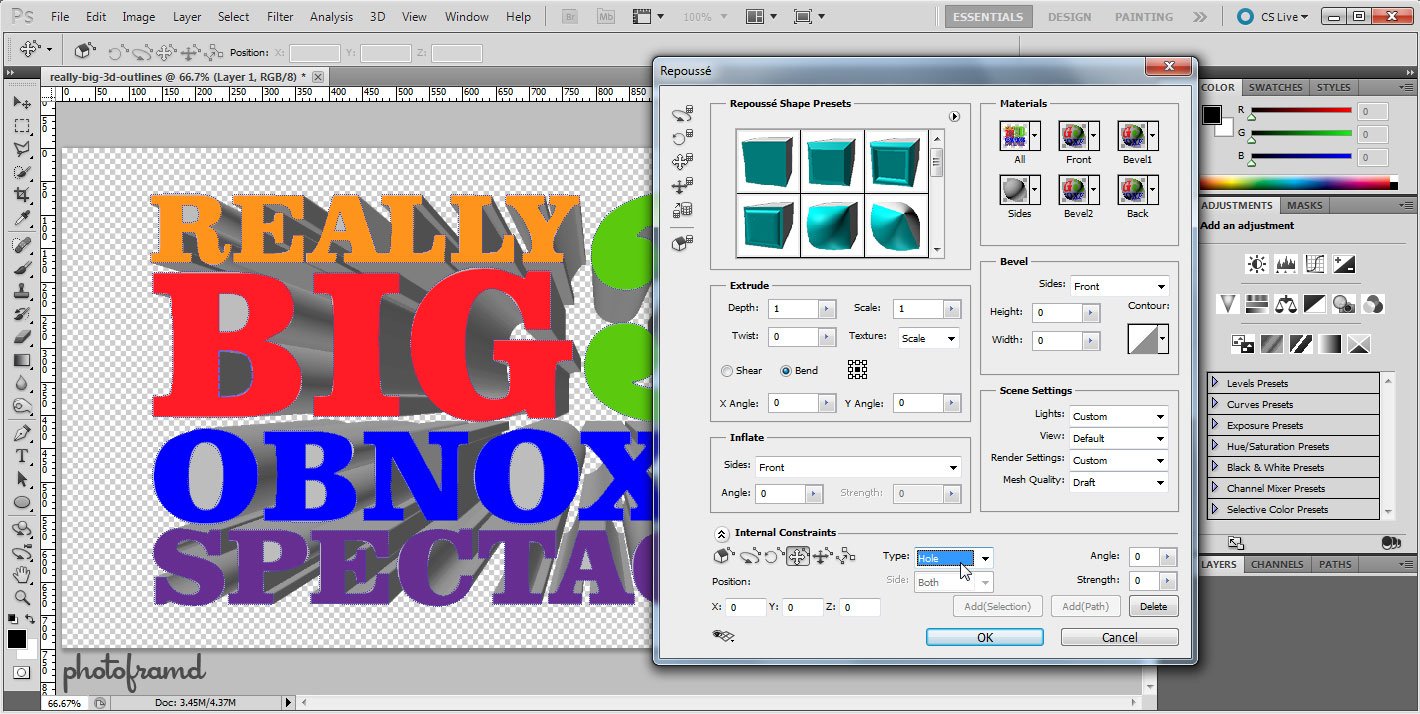 Back in the Repousse Panel, under Internal Constraints, change the Type to Hole.  The selected path will now be deleted from the filled solid.  You now need to repeat this step individually will each of the remaining paths to finish the Holes. 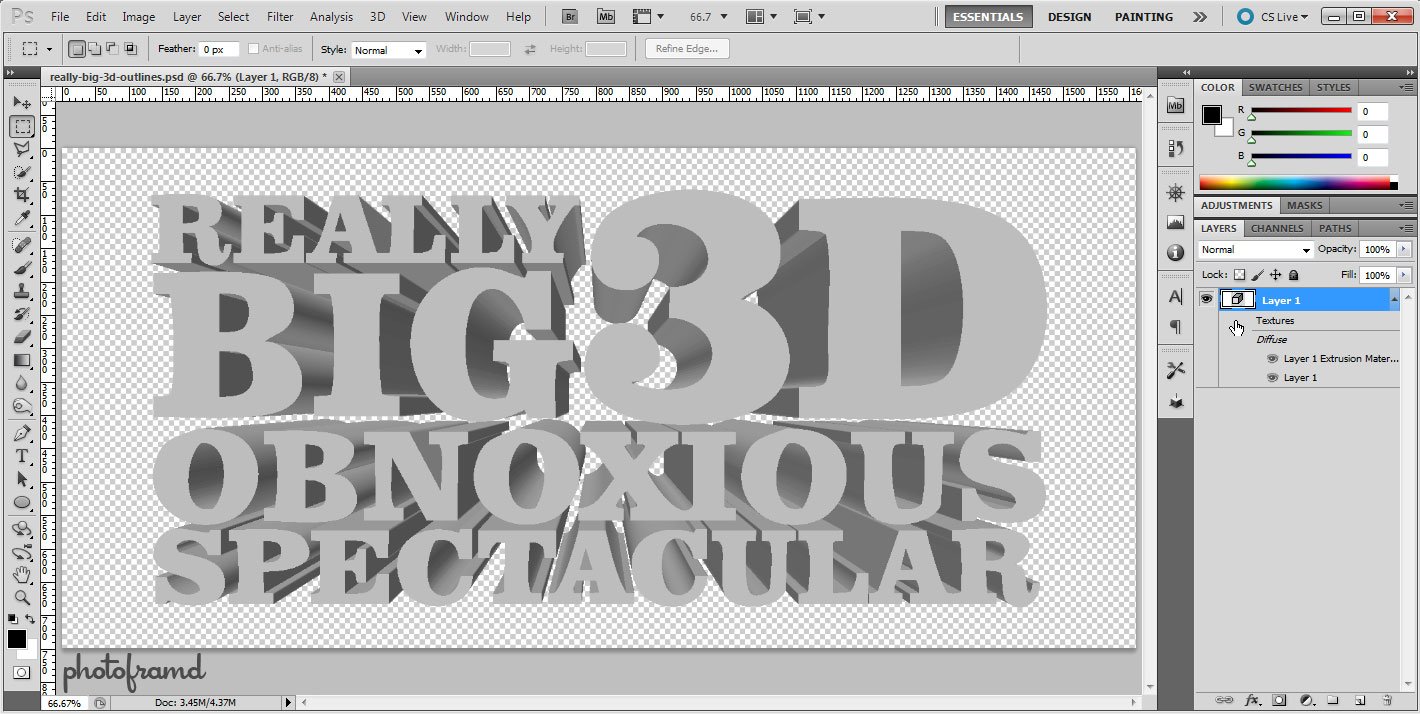 This process is time consuming. But, even more annoying is the fact the the 3D solid still does not pick-up the colors from the original Illustrator file.  So, if you are looking to create a multicolor 3D solid, you are still better off recreating the file in Photoshop directly.  Hopefully, this will change with future updates to Repousse.