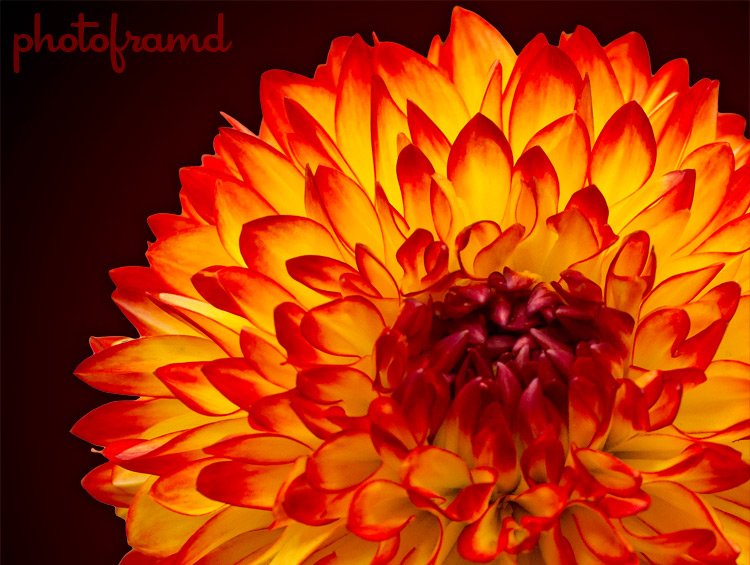 Five years ago, I was just making the move from film to digital with the Canon 20D.  The camera performed very similar to my previous film Canons which made the transition fairly easy.  Still, practice is everything.  I was going out every weekend with the 20D to get used to the camera in the field.  My first weekend out, I stumbled upon a special flower show on Long Island.  The show was just dahlias of every color, shape and size (from 2-inch blooms to well over 1-foot).  It was the Fall Dahlia Show presented by the Long Island Dahlia Society and every flower was more beautiful than the last one.  But, there was one that really stood out.  It was a multicolor sunburst that really spoke to me.  I took a few shots which looked good on the LCD, so I continued shooting and had a great day.

Unfortunately, when I had a chance to pull the RAWs into Photoshop, I realized that the center of the dahlia was soft.  The overall photo was still good.  In fact, one client was so thrilled with it, that it was used in their print ads, brochures and even their website.  But, I knew better.  The center of a flower is similar to a model’s eyes; they need to be as sharp as possible in a direct shot.  Every Fall since then, I have returned to the dahlia shows on Long Island, hoping to get a second shot.

It finally happened this weekend at the Fall Dahlia Show by the Mid Island Dahlia Society.  Yes, dahlia’s are so popular on Long Island that there are two competing clubs with active members up and down the East Coast.  This time, I was armed with the Canon 7D and the Canon 35mm f/1.4 L.  The above shot was that rare second chance.  Of course, this time, I was not taking any chances.  I shot approximately 20 shots with varying f-stop to be sure that I got the perfect shot.  I also switch the AF to Spot for a precise focus.  And, just to be sure that I covered all the bases, I even switch to Live View and magnified the view x10 to manually focus.  The wonders of the Canon 7D!  Glad I remembered it 😉

If you are in the New York area, you should try to visiting these Fall Shows.  Each dahlia group has multiple shows in the Fall.  In fact, next weekend is show by the Long Island Dahlia Society on October 2 & 3 at the Bayard Cutting Arboretum.

NOTE – It is very appropriate that even the Canon 35mm f/1.4 L is a second chance lens.  I wrote about this lens before.  I purchased it used from Adorama and saved 30% off the cost of the lens new.  Adorama tests and rates every used lens it sells, so there are no surprises … just some real savings. Before you buy your next lens, take a look at Adorama’s Used Equipment Dept.