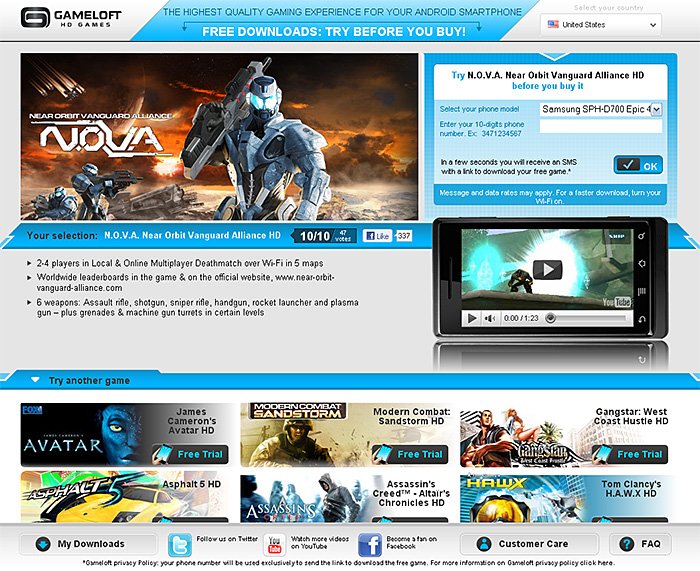 In my previous article, Samsung Epic 4G – First Week – Part 2 – Games and Apps, I wrote about 3D games by Gameloft.  As the mobile division of Ubisoft (the publisher of Assassin’s Creed, Tom Clancey and Prince of Persia), Gameloft knows 3D games.  Gameloft has decided to withhold new games from the standard Android Marketplace and sell them direct through their own website.  At the time of the article, I indicated that their “Try and Buy” approach where you request a download link sent to your Android phone as a TXT was not working.  Well, they have bigger problems.

At the time of the article, I purchased their game N.O.V.A directly through their website at Gameloft.com.  I created an account on their site and purchased the game.  First, I tried my AMEX card which did not work, apparently because the site did not accept AMEX (no message was posted on the site).  I then tried my Mastercard which was accepted and I received a confirmation email and the game was fully enabled.   Everything seemed fine.

Two weeks later, both my AMEX and Mastercard were compromised. Both credit card numbers were used to place fraudulent gift card orders on Newegg.com.  I am 100% certain that these credit cards were compromised through the use of Gameloft.com. The only unusual transaction made with either card was this game purchase through Gameloft.com.  Thankfully, both orders were identified by Newegg as fraudulent and were never processed.  I filed a complaint through Gameloft but have never received a response.

The fact that both credit cards were used in fraudulent transactions on Newegg for gift cards is the key.  The only common link between the two cards is the transaction with Gameloft.  I have not heard of any other reports against Gameloft, but I am hoping that this article will bring the problem to light.  Beware of Gameloft and do not purchase games through their Gameloft.com website.