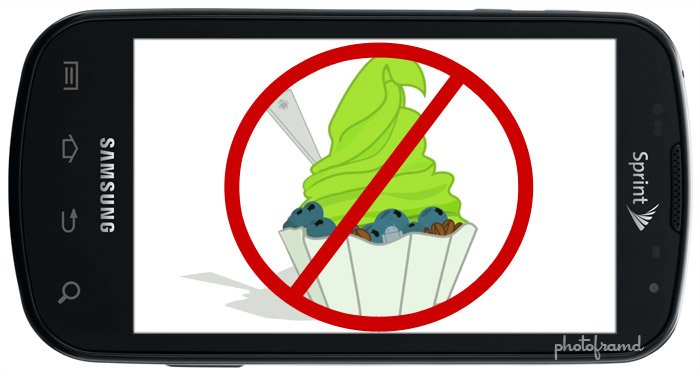 The hardware in my Samsung Epic 4G is incredible. Super Amoled screen, keyboard, quick 1GHz Hummingbird processor and 4G.  In fact, most owners of any of Samsung’s Galaxy S Class phones (including Epic 4G, Fascinate, Vibrant, Continuum and Captivate)  love their “tech”. Google did select Samsung to build their newest Nexus phone after all, and Samsung has sold over 10-million Galaxy S Class phones making them the top manufacturer of Android phones.

Despite these impressive hardware sales, Samsung is now under attack for their apparent lack of US support once these phones have been sold and outside of the 30-day return window.  You see, all of the Galaxy S phones in the US have been stuck at Android 2.1 while, in the rest of the world, the equivalent Samsung phones have been upgraded to Froyo Android 2.2.  Samsung had repeatedly promised Android upgrades for all Galaxy S phones by the end of 2010.  Considering Samsung has already announce a slew of new Android 2.2 phones for each US cellphone provider, existing Samsung owners feel abandoned.  A quick review of the Forum at AndroidCentral.com reveals comments like “Goodbye Samsung”, “Never again” and “boycott Samsung”. This is a very vocal and tech-savy group. The only “official” info released by Samsung has been through their Twitter account, repeating the following statements over and over again:

@GalaxySsupport – We’re working to make the Android 2.2/Froyo upgrade available to all U.S. Galaxy S owners as soon as possible.

@GalaxySsupport – We want Galaxy S owners to have simple/reliable upgrade. We are running tests due to complexity/unique functionality.

After repeated disappointments and broken promises, Galaxy S owners are now taking action.  Several sites have reported a pending class action against Samsung and T-Mobile over the Samsung Vibrant.  This phone has been plagued with GPS problems since its introduction and Samsung’s attempted fixes have failed.  Electronista.com reported that the class action accuses Samsung and T-Mobile of “violating the Uniform Deceptive Trade Practices Act for promising an update in the short term but delaying to the point where the Vibrant 4G would ship with the OS already onboard.  The two companies hadn’t lived up to promised fixes and was saving them for a new model.”  Basically, forcing existing owners into purchasing the new Samsung Vibrant 4G to get a working GPS as well as the Android 2.2 update (as reported by Androidspin.com).

CNET was able to get an official response from Samsung stating:

Samsung Mobile does not comment on rumors or speculation. With regard to the Froyo update, we recently issued the following statement: “Samsung feels it is important to make the Android 2.2/Froyo upgrade available only after we feel that we can give the millions of U.S. Galaxy S owners a simple and reliable upgrade experience. Due to the complexity and unique functionality of each Galaxy S device, we are performing additional testing and are working to make the Android 2.2/Froyo upgrade available to all U.S. Galaxy S owners, including the Samsung Vibrant, as soon as possible.

Now, the real juicy rumor floating around – Samsung is intentionally withholding the Android 2.2 updates from US customers in an attempt to force cellphone providers to PAY for them. A posting on xda-developers.com Forum (and first reported by AndroidPolice.com) by an “insider” subject to various NDAs made the following claims:

In the past, most phone updates would mainly consist of critical and maintenance updates. Carriers almost never want to incur the cost of a feature update because it is of little benefit to them, adds little to the device, and involves a lot of testing on the carrier end. Android has changed the playing field, however – since the Android Open Source Project is constantly being updated, and that information being made widely available to the public, there is pressure for the phone to be constantly updated with the latest version of Android. With most manufacturers, such as HTC, Motorola, etc. This is fine and considered a maintenance upgrade. Samsung, however, considers it a feature update, and requires carriers to pay a per device update fee for each incremental Android update.

Now, here’s where the politics come in: most U.S. carriers aren’t very happy with Samsung’s decision to charge for Android updates as feature updates, especially since they are essentially charging for the Android Open Source Project’s efforts, and the effort on Samsung’s end is rather minimal. As a result of perhaps, corporate collusion, all U.S. carriers have decided to refuse to pay for the Android 2.2 update, in hopes that the devaluation of the Galaxy S line will cause Samsung to drop their fees and give the update to the carriers. The situation has panned out differently in other parts of the world, but this is the situation in the United States.

Juicy, right!!! And, it would certainly explain Samsung’s behavior. Of course, Samsung has denied this too. Phonescoop.com received the following response:

Samsung is not charging carriers for Froyo updates to Galaxy S. We hope to have more detail on status shortly. Promise!

So, what is a Galaxy S owner to do? Try a Custom ROM upgrade to Android 2.2

The Android platform sits on top of Linux OS. As a result, Linux programmers have been very successful at gaining Administrator access to these phones “to root” them and implementing custom modifications. In fact, these ambitious programmers have been able to flash their phones with various Android upgrades, even the newest Gingerbread! These actions will void your phone’s warranty and there is the possibility to turn your shiny phone into a plastic “brick“. Still, there are many Galaxy S owners who swear by it. For the Samsung Epic 4G, some of these ROMs are called CyanogenMod, Nebula Rom, TrulyEpic and ViperRom. AndroidCandy.com maintains a list of Epic 4G Roms. And, these programmers take great pride in their work, issuing weekly enhancements and bug fixes. Shame Samsung is not as responsive!

These ROMs have customized interfaces, animations, sounds on top of the Android 2.2 update. If you are interested, AndroidCentral.com has a detailed step-by-step for installing a ROM called TrulyEpic Rebirth. Also, there are several videos on YouTube which demo the most popular custom ROMs. In fact, RandyShear has a YouTube Channel with over 25 different ROM tests for the Epic 4G. Just take a look at his video for the ViperRom to understand the “rooting” and “flashing” process for the Samsung Epic 4G. Based on his comments, Randy likes the performance of the ViperROM the best. TeamVIPER has released frequent updates and just launched a dedicated site, forum, chat and even a support ticket service. Samsung should have such dedication to their phones!

No news creates a vacuum of discontent.

It’s amazing that a global technology leader like Samsung would treat its loyal customers in such a fashion. Samsung needs to come clean and explain exactly why these updates have not been issued in the US. It is possible that the pending Android updates force a complete wipe of all data on these phones (contacts, calendar, emails, music, paid Apps, etc.) and Samsung is attempting to avoid this. It is also possible that Samsung’s customized TouchWiz is causing the delay. Either way, Galaxy S owners deserve an official answer. Most importantly, we deserve the Android 2.2 update … and a timely update to Android 2.3!

Driven by strong year-end demand for the company’s flagship smartphones, Samsung’s mobile device sales reached 80.7 million units for the quarter, up 17 percent year-on-year. This brought total sales for the year to 280 million units, registering growth of 23 percent and outperforming the overall market.

Although Samsung reported record growth, it is unlikely to continue. The simple truth – how many current Galaxy S owners would purchase another one when the company has clearly failed to support them?

What is fair? What should happen? Cellphone owners are typically locked into a 2-year service contract for their phone. The cellphone manufacturer should be required support their phones during that period of time. That support should include software upgrades (like Android releases) which are compatible with the cellphone’s hardware and necessary for proper functioning (like bug fixes for known GPS problems). I believe the only way to guarantee this support is for Google to add a clause to the Android Developer Agreement to force hardware manufacturers to supply timely updates to minimize market fragmentation.  (It is unlikely that the Open Handset Alliance which is dominated by hardware manufacturers would agree to such a clause.)  Otherwise, it would take an act of Congress to protect the consumer (which also seems unlikely under current political trends).

One Reply to “Frustration with Samsung Mobile over Android 2.2 Froyo Updates leads to Rumors, Lawsuits and Homebrew Custom ROMs”