Home »General Life»Samsung Epic 4G – To Root or Not To Root? That is the Question (Updated!)

I know that everyone is dying for the finally announce Samsung Galaxy G3.  But, Sprint did release a new update for the Samsung Epic 4G (not the Touch – the older one with a keyboard.)  It is still Gingerbread, but with some fixes and enhancements.  If you are rooted, the OTA (over-the-air) update will fail and possible screw-up your phone in the process.  Instead, you can find the two parts of the update on the XDA forum.

The Modem is now FC09 and you will need to use Odin to install it.  You can download the BIN file from here and watch a video on how-to update it.  Just remember that since this is a BIN you will need to put it in the Phone slot NOT the PDA slot as shown in the video.

You will also need the EL30 to FC09 update.  There is finally a stock version which has been deodexed and pre-rooted and you can download it from here.  This version will ONLY work if you are already on EL30 which was the last official release from Sprint.  Be sure to Wipe your Cache and Wipe your Dalvick Cache 3x before you install the update.  Note – If you are running a custom ROM, this update will not work for you.

Benefits – Sprint claims that this update eliminates the random reboots which still plagues this 2-year old phone.  The GPS is also much faster.  Nice that they finally got it right!  This update also has the WIFI Optimizer which Sprint has promoting.  The whole update process will take about 15-minutes and does NOT wipe your phone!  All of you data and programs will still be there after the update process.

Just want the Stock FC09 update? If you are not already rooted and want to stay that way, you can download the authentic FC09 direct from Google from here.

Want a Custom Rom?  There are several custom ROM for the Samsung Epic 4G available in the Developers area of the XDA forum.  Just keep be sure to read through the thread for comments and problems associated with each one BEFORE you install them.

Samsung has heard the cries against CarrierIQ and is in the process of removing it from their Android Smartphones for the original Galaxy S line.  Sprint recently released the Over-the-air (OTA) Update for the Samsung Epic 4G.  However, if you have rooted your phone, the OTA update will fail.  Thankfully the XDA Forum has been actively working on releasing a flashable version of EL30.

You will need to download two-parts to update the ROM and the Modem to EL30.  You can download both files directly from the XDA Forum and flash them using Clockwork Mod.  These files will keep you rooted and your data will remain intact.  These files will also work if you previously applied the GPS fix to the Epic.  (This was an issue will an earlier flashable EL30 version.)

The EL30 update requires that you are still on the stock BML/RFS format.  If you have converted to EXT4 or MTD, you will need to convert back to apply these files or keep waiting for a developer to release a revised version.  Keep checking the XDA Forum.  They have already released the EI22 to EL30 modem here.

EL30 is still a Gingerbread release.  It removes all traces of CarrierIQ and includes a few bug fixes.  Since Samsung has already announce that the original Galaxy S line will NOT be updated to Ice Cream Sandwich (ICS), this may be the last official update for the Samsung Epic 4G.  Thankfully, the developers on XDA still love the phone and are continuing to release custom ROMs and kernels!

Almost a year after its official release, Samsung has finally release Gingerbread for the Samsung Epic 4G.  This release is available OTA only if you are on a stock ROM and did not root your phone.  If you did either of these, you will not receive the Over-The-Air update for Gingerbread.  You could always use Odin to return to a stock EC05 official Froyo release and remove the Root from your phone.  Be sure to install the EC05 modem as well.  I tried this, but was tired of waiting.  I also tried using the manual update direct from Google, but this only generated errors while verifying the download when I tried to install through Clockwork Mod.  This problem seems common for anyone that had previously rooted their phone.

Instead, I used Odin to finally update to EI22 Gingerbread. Odin is a very powerful program.  It is capable of restoring even a “bricked” Epic back to life!  I followed these steps:

BEFORE YOU START – Be sure to read the threads for possible problems.  QBKING77 has a great series of YouTube videos for the Epic 4G covering custom Roms and various update methods to Gingerbread.  Read everything. Watch the videos. Get comfortable with the process BEFORE you start.  It can be scary if something goes wrong, but there are plenty of threads in the XDA Forum to help.

[Original post 2/21/2011.]  So Samsung/Sprint finally released the Froyo (Android 2.2) for the Samsung Epic 4G on February 21st, 2011 only to pull the OTA (over-the-air) update 18-hours later citing various problems.  You can still manually update the Samsung Epic 4G with the official EB13 release, but there are better options available … namely Custom Roms!

If you are an Samsung Epic 4G owner, you will be comforted to know that there is a large user support base for the phone.  Even if Samsung and Sprint can’t get this update to work, there are several home-brew teams that have.  Using the previously leaked DK28 Test Build (formerly known as the “official release”), these teams have tweaked this unreleased Android 2.2 upgrade, resolved bugs and modified the performance.  They are even starting to include updates from the official EB13 source code to make further improvements. The result is a stable upgrade with fast performance and some cool bells and whistles.  For example, Team Viper’s latest release called VIPERrom Trinity v2.0 EXT4-RFS Dual DK28 4.0.4 offers the following enhancements over the stock Samsung Epic 4G: 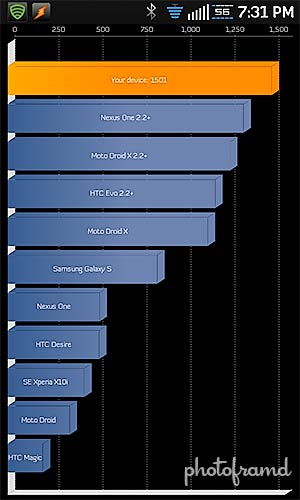 2.  Custom boot-up and shut-down animations with custom sound effects throughout

4.  Flash enabled (to be downloaded direct from the Android Market)

10. Launcher Pro (instead of Samsung stock launcher) with 5 App Dock (with Froyo Wide setting) on Home screens with user-selectable Apps (This is a trial license.)

12. Custom transitions and animations throughout

14. User-customization on virtually every operation of the Epic 4G

15. Viper Team has a dedicated site, WIKI , XDA forum and even a trouble ticket system just for the Epic 4G.

NEW 16. Camera & Video recording using DK28 drivers which do not have the EB13 lag/blur problems

It’s an impressive list.  (Take a look at the YouTube video here.)  And even more impressive that this home-brew group completed something that two multimillion dollar corporations (namely Samsung & Sprint) could not/would not … update the Samsung Epic 4G with Android 2.2.

Downside of Rooting and Custom Roms.

If the results are so great, than why doesn’t everyone just do it?  The entire process involves substantially changing the state of your phone.  As such, you are voiding your warranty and taking a chance on the results … namely, you can end-up “bricking” your phone.  The forum.xda-developers.com has threads on restoring a damaged phone back to the factory original software and settings.  However, keep in mind, that it is your phone, your actions and your responsibility.  The forum does have plenty of info and the active members will try to help, but ultimately it is your decision and your risk. 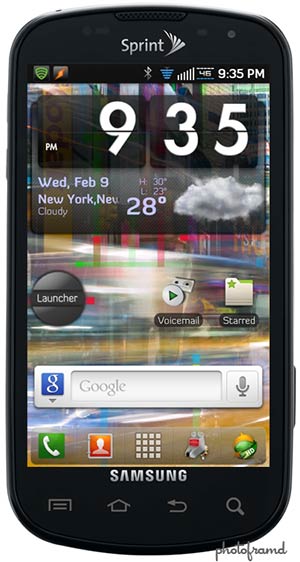 Precautions before you start!

Before you even think about updating your Samsung Epic 4G, you should take precautions:

1.  Update your phone’s Contacts to your Gmail account. Verify that the info is on Gmail and complete!

3.  Back-up your phone’s SD Card to your PC.  Verify that your files (MP3s, videos, photos, etc.) are all backed-up on your PC.

The entire rooting and flashing process will erase your phone’s internal memory.  If you decide to update your files to the new EXT4 format, there is a possibility that your SD Card files can be damaged.  Better to take precautions before you start.

Based on threads from various blogs, you can have conflicts and problems when your existing programs are left active in your phone’s internal memory.  Your best bet for a safe process is to uninstall programs like LookOut, Watchdog and other monitoring programs and then perform a hard reset on your phone.

This step will erase all user settings and files from the Epic 4G’s internal memory.  Again, it’s very important that you backed up your data!

And now the hand-off to the Pros…

There are several people that are real pros at the whole rooting and flashing process for the Epic 4G.  The Team Viper has plenty of info on their site, WIKI and XDA forum.  For additional background, there is a great walk-through on Android Central which explains the process using a different Custom Rom called Truly Epic.

But, watching a video really helps. RandyShears has a great YouTube video which starts with a Samsung Epic 4G reset to factory default settings and walks through the entire rooting/flashing process with the ViperRom.  This video was recorded in December 2010 and there have been interim updates to the software as noted below.

NOTE: If you did apply the EB13 (Froyo Andriod 2.2) update from Sprint, you will need to follow a different set of procedures in order to Root and install a Custom ROM. Android Central has posted great step-by-step instructions in their forum.

So it’s up to you … Root or not to Root? Read all the info and make your own decision. Watch RandyShears‘ video a few times.  Watch the ViperRom demo video to see if the improvements are worthwhile to you. But, most importantly, let’s continue to put pressure on Samsung and Sprint by tweeting the following:

The Team Viper responsible for the ViperRom Trinity and Synergy Roms has apparently come to an end.  Their website is no longer active and many of their threads on XDA have been closed.  Rodderick is still active with his custom kernel for the Epic 4G.  You can also find the other members in several threads.  Shame them never released their Gingerbread Rom.  But, there are plenty of other custom Rom developers in the XDA Forum!