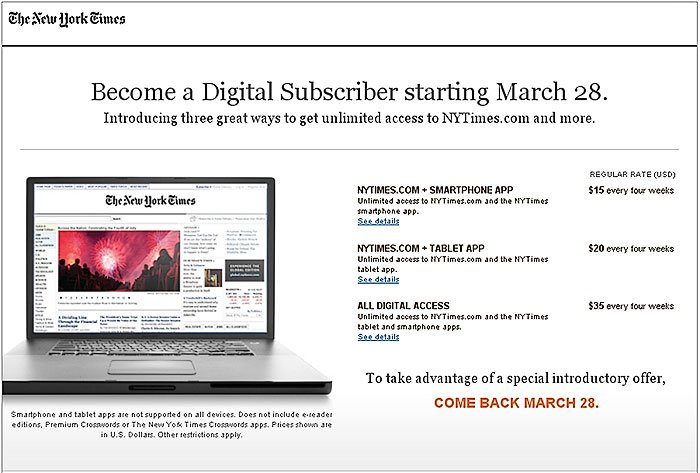 New Yorkers are a tough crowd.  If you offer them a deal, they will go for it.  That includes going for a non-green/non-earth friendly deal even though they know better.

In an open Letter to its Readers, the New York Times announced both a 20 article cap on free access to nytimes.com and their new digital subscription plans.  And, going digital is not cheap.  There are three different tiers depending on the device:

The New York Times has several home delivery subscriptions as well.  Daily home delivery to anywhere in Manhattan, Queens and even Long Island is $5.85 per week.  BUT, you can get a partial delivery for a little over $3 per week:

If you subscribe to ANY home delivery, you will get FREE UNLIMITED 24/7 access to NYTimes.com (including web, smartphone app and tablet/reader).

The New York Times proudly proclaims their Environmental Stewardship and Social Responsibility on their website and states, “it is strongly committed to protecting the environment in all of the many communities in which it operates.”  However, the new digital subscription plans prove their true motive – to cut down more trees – even though they know better.