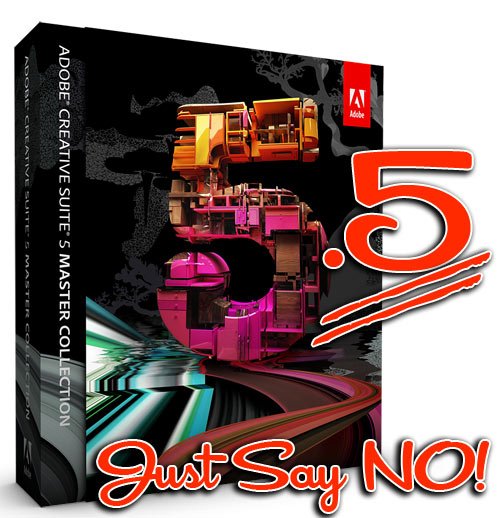 By now, you have heard that Adobe officially announced CS5.5. Of course, I warned you about this last year when I was part of a survey to see how creative developers would respond to the idea. I hated it back then and still do.

At its core, CS5.5 is about adding HTML5 development to the Adobe suites. This is in response to Apple’s continued prohibition of Flash on the various iOS4 platforms (iPhone, iPad,  iPoop, etc.).  So, CS5.5 is all about making Apple happy.

First of all, 2011 is a very different place. By all analyst projections (Nielsen, IDC, Canalys, comScore, etc), Android will overtake the iPhone as the most used smartphone platform this year, if it has not already done so.  And, as of Android 2.2, Flash has found a home on this new smartphone leader.  So, do we really need CS5.5 to develop for Apple’s fading platform? Again, I say NO!

Second, Adobe had the HTML5 development tools in production when CS5 was first released. This is obvious by the content of the survey.  In fact, had Apple continued its hostile media war on Adobe and Flash back then, Adobe would likely have thrown HTML5 development into CS5 just to up Apple’s ante.  So why should we pay for it now?  And, the spec for HTML5 is still in the working draft stage with W3C.org.  What happens when it is finalized?  Will Adobe release CS5.7 with another upgrade fee? Going from Double-dipping to Triple-dipping…

But, most annoying is the cost. Adobe does not have the confidence in this release to call it CS6.  Photoshop remains at CS5.  Instead, it is a half update.  Yet, they are charging FULL price for it. (OK, so it’s $100 less than the CS5 upgrade.)  And, if you do buy it, don’t expect any additional discount towards CS6 whenever that drops.  Based on past experience, if Adobe offers a discount for CS5.5 owners, it will only be $50 less than CS5 owners.

How could Adobe force you to purchase CS5.5? Camera Raw. With every prior Suite release, Adobe has included a new version of Camera Raw. When this happens, the support for the previous version ends.  If this happens and Canon finally releases the 5D Mark III, 7D Mark II and 1Ds Mark IV, expect only the current version of Camera Raw to support these new Raw formats.  Older versions of Camera Raw in older Suites are never updated for new cameras.  Of course, Adobe Lightroom 3 would be updated to support new cameras (at least until Lightroom 4 is released).  Considering how closely tied Lightroom and Camera Raw are in their development, Adobe would definitely have to explain any differences in support.  Just remember … there is always Canon’s Digital Photo Professional (DPP) and it’s free!