So after stupidly killing off Flash Mobile (thereby driving a stake through Flash’s future), what’s Adobe going to do next? Screw over the rest of its customer of course.

According to Rob Galbraith, Adobe is implementing a new Upgrade Policy with the release of CS6.  In order to qualify for Upgrade Pricing for CS6, you will need to be a licensed owner of  CS5 or CS5.5.  Earlier releases will NO LONGER BE ELIGIBLE FOR UPGRADE DISCOUNTS!  Adobe is now forcing you into upgrading with every major release in order to keep your upgrade eligibility!  If you own CS4 or earlier, you will either have to purchase a NEW full CS6 license or sign-up for the monthly subscription program.

Dear Adobe, don’t you realize that such tactics will only encourage Piracy with more users unable to afford your massive bundle pricing??  Guess not.

Remember when I posted an article about Adobe’s plan to charge for a CS5.5 update and no one believed me??  Well, I just completed a new Adobe survey that floats a new possibility – ending the update discount to force you into a subscription plan.  Take a look at the following screens: 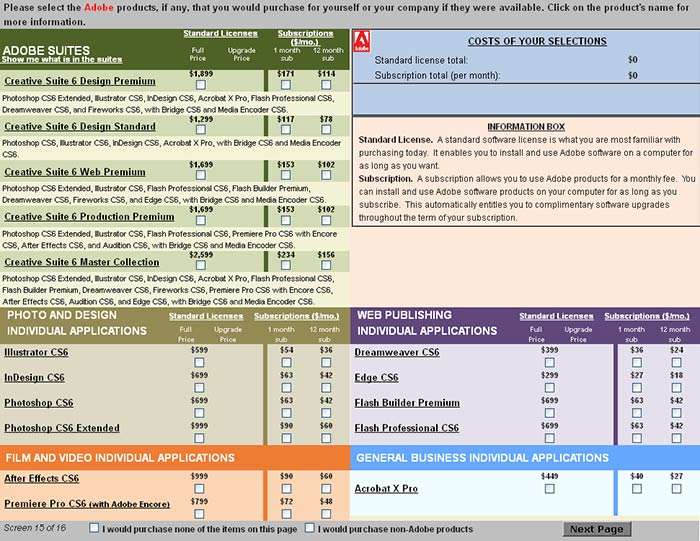 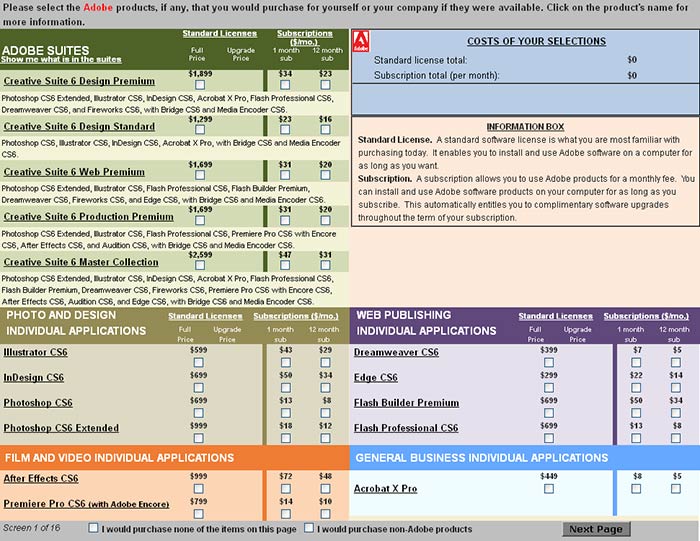 Notice that the Upgrade price column is blank.  That is not an error.  That is a possibility.  Eight of the sixteen price variations in this survey did NOT include an Upgrade Price!  The next column indicates the highest and lowest monthly subscription price included in the survey. Under this scenario, if you want CS6, you have the choice of buying a new full license OR committing to a monthly subscription!

The next two screens include the upgrade discount as well as the subscription price.  But, to emphasize, half of these pricing scenarios did not include an Upgrade, only a monthly subscription.  This is a real possibility which Adobe is testing for response. 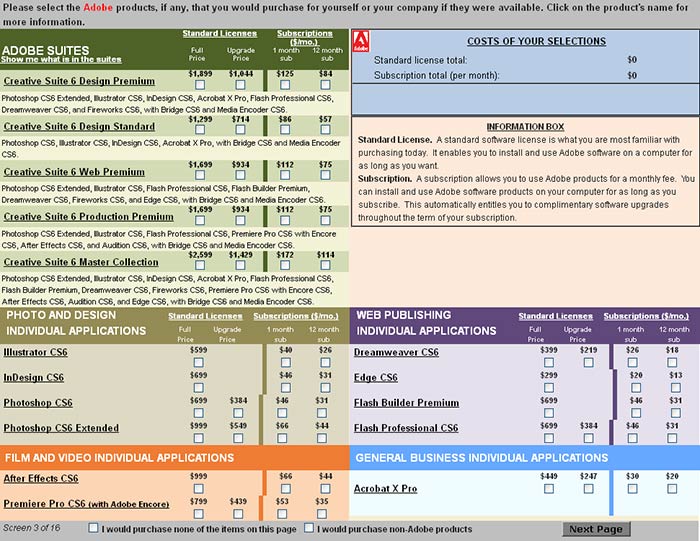 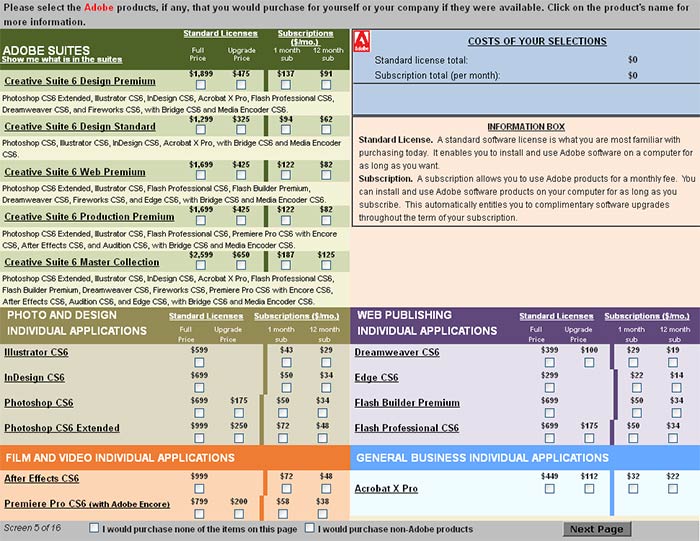 The above screens show the range of the upgrade price in the survey, from highest and lowest, as well as the monthly subscription price.  I do love the bad HTML coding 😉

So what are the highlights of CS6?  Take a look at the summary with details for Photoshop CS6, Premiere Pro CS6, Illustrator CS6 and Flash Pro CS6  (the major updates in the Suite) below: 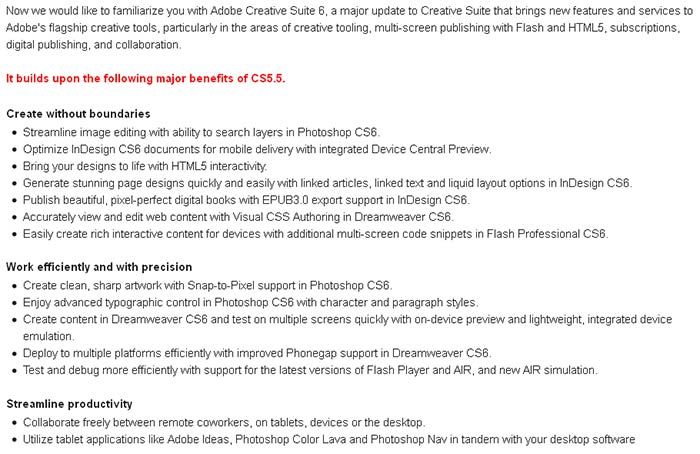 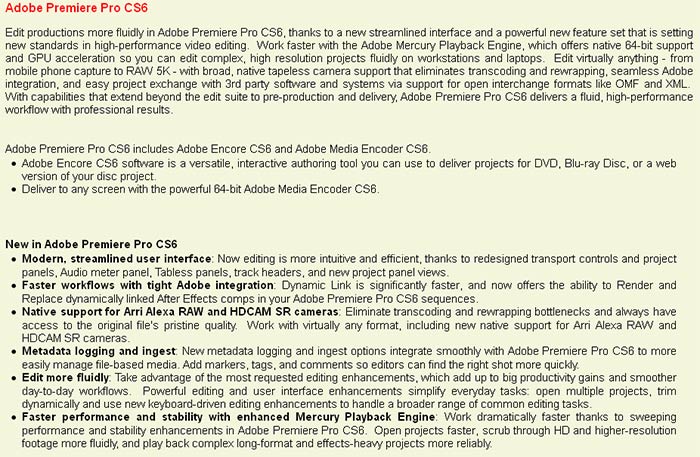 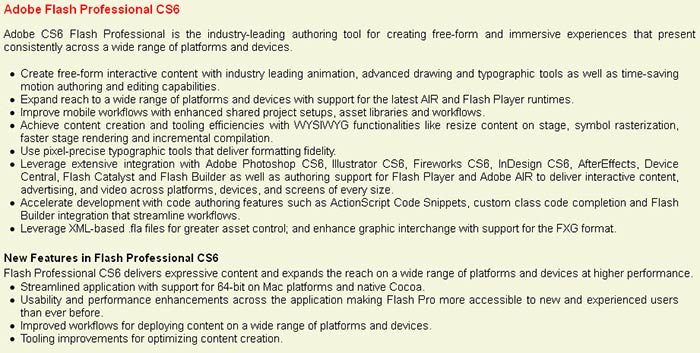 Adobe has already formally announced that it plans to release an upgrade every year, alternating between a full release and a “.5” release.  So, this next release will include everything from the CS5.5 release as well as some significant new features. [NOTE – Adobe announced the release date for CS6 will be mid-2012.]

So what’s wrong with a monthly subscription? Several things!

1.  You are loosing your rights as a licensed user.  You are now on a pay as you go plan.

2.  If you stop paying the monthly subscription, you have NO RIGHT to use the current version.  In fact, it will be disabled by a “nag screen”.

3.  If you want to skip an upgrade, you can’t!  You are forced into paying for an upgrade whether you want it or not.  Remember, if you don’t pay, you don’t play!

4.  You are paying for bloatware (features that you do not need nor want), and you have lost your ability to say NO to a larger install which will tie up more system resources and slow down your system!

It is unfair to eliminate a flat upgrade discount for existing Creative Suite users.  Trying to force customers into a monthly subscription plan will not succeed.  It will only encourage more software piracy.