Did you see my latest time lapse video – Soho and the Gritty City?  It contains over 3000 still photos shot with the Canon 7D and the Canon 17-55mm EF-S lens.  Each photo was batched through Photoshop CS5 using Topaz Adjust and my Grunge Me Presets.  The end result really is moving pictures.

The key to shooting so may photos is an Interval Timer Remote (also called Intervalometer).  This remote is used to automatically take a photo at a specific interval; in this case, every 1-second.  The interval will vary according to the subject matter.  Quick moving scenes like a busy street can be set for 1-second.  Slower subjects like a sunrise, sunset or clouds can be set for 60-seconds.

Until recently, the only Interval Timer Remote for Canon DSLRs was the Canon TC-80N3.  Very reliable, but, at $150, it is also pretty expensive for something that will be used once in a while.  I was in B&H recently talking to my rep and we discussed several new items including two new Interval Timer Remotes!  Take a look (note – all remotes were photographed with their protective film in place): 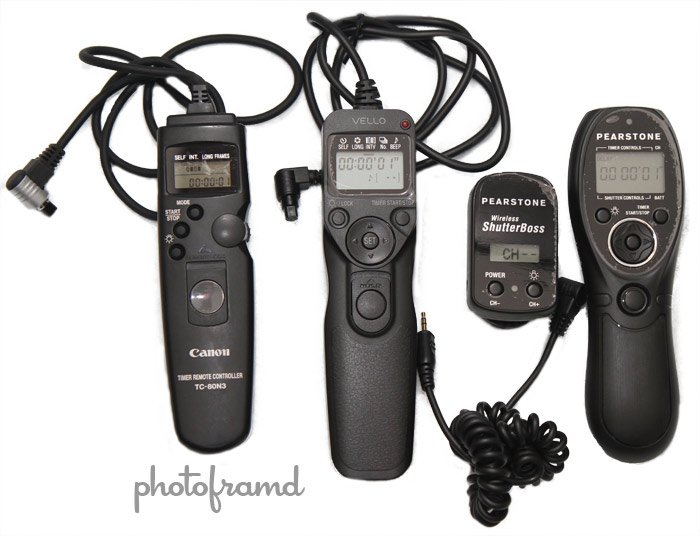 The last remote is something really special – Vello Wireless ShutterBoss Timer Remote.  All the same features as the other two remotes in a WIRELESS remote with a range of up to 250 feet!  The receiver sits on a hot shoe with a cable running to the camera’s cable release connection. The remote transmitter can be used from any angle and has 99 radio channels running through 2.4 GHz frequency.   The remote can even be used to wirelessly trigger multiple Pearstone receivers as long as they are set to the same channel.   Set up several cameras to cover different angles and trigger them all with one remote.  Now that is cool! Having a problem getting a clear signals? You can even directly connect the remote transmitter and the receiver by a cable, turning it back into a wired remote.  I have a few more ideas for another time lapse video and plan to test the Pearstone Wireless Shutterboss in the near future.

One More Tip – Be very careful of the focus while shooting.  A change in focus (like shifting from a distant building to a nearby person quickly moving through the frame) will ruin the staggered animation effect.  Either set the focus point really high out of the way of passersby or set the lens to manual focus.  Even if you do shoot a few change of focus photos, you can probably pull them without a significant impact on the animation.  Remember is will take 24 still photos to fill 1-second of video.