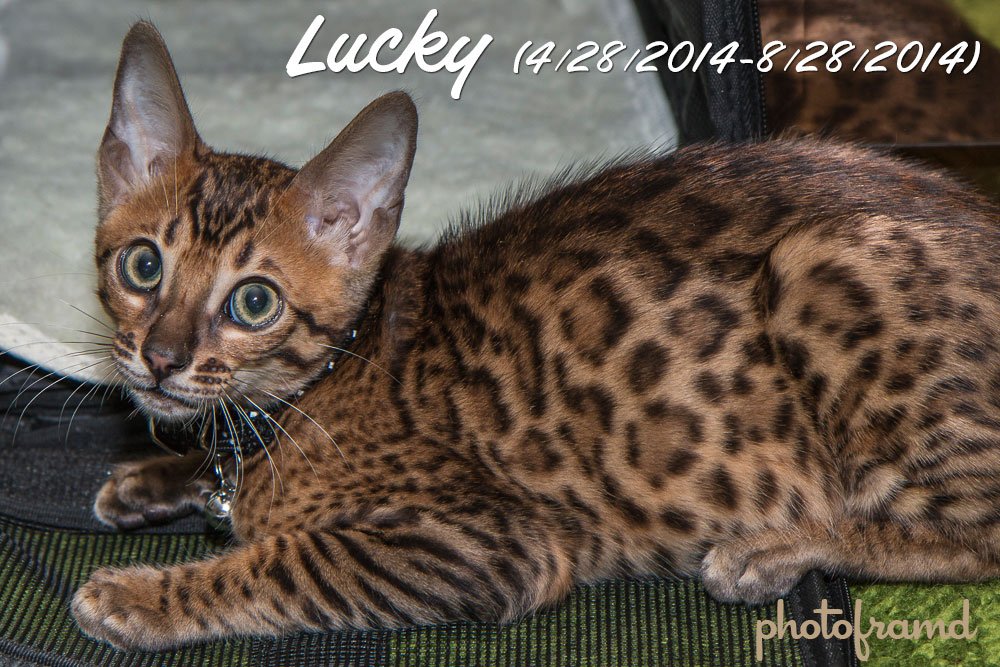 Lucky was the sweetest kitten I ever had. Although he was a pure Bengal, he loved to be held and would sit in your lap for hours at a time. Unfortunately, he had FIP and died at 4-months. I only had him for 1-month of his life, but he touched my heart so deeply. He did not deserve this terrible disease.

FIP or Feline Infectious Peritonitis is the disease that vets worry about. It is deadly and is not treatable. There are reports that many cats and kittens are exposed to the Coronavirus and may be carriers, but in some cases, it mutates into the deadly FIP.

Lucky was from Xanadu Dream Bengals in Ft. Lauderdale. I was looking for another Bengal, and something about Xanadu’s cats stood out. When I saw a picture of Lucky, I knew he was the one. He was beautiful! He was covered in rosettes from head to tail. I asked a bunch of questions and everything seemed right. He also had a “health guaranteed” as stated on the breeder’s website.

I flew down to Ft. Lauderdale to meet the breeder, see the cats and pick-up Lucky. He was just 12-weeks old. The breeder had an outdoor patio with cat fencing where he let the cats roam. They also used this area as a outdoor litter box. When I saw Lucky urinate on a patch of dirt, I asked if he was litter box trained and the breeder assured me he was. (First clue?) While I was waiting on the patio, I saw two of his breeders go under a gap in the fence and escape into the neighborhood. They eventually came back on their own, so this seemed like a habit for the pair. When I questioned the breeder about this, he just dismissed it and said that they can get out of the Stud House as well. (Second clue?) Eventually, we started the paperwork and he left because he had “new stickers” for the vaccinations that he wanted to use. He apparently was also acting as their vet as well. (Third clue?)

I flew home with Lucky and all seemed fine for the first week. I had my vet check him out within two days. In the vet’s office, he sneezed and started to tremble due to the cold air-conditioning. The vet saw it. He asked if he was vaccinated. I said “yes” and showed him the paperwork. The vet just dismissed the behavior as a “kitten cold”. Everything seed fine.

At first, Lucky was a crazy ball of energy. He would run around so fast that his rear legs would catch up with his front and he would run sideways! He also did the sideways hop that I loved about Bengals. He would play with just about anything. If he could reach it, it became his toy. But, he also loved to snuggle in for a nap. Lucky was my dream kitten.

That first week, I did have some litter box issues with him. He would use the litter box, but also thought nothing of using the carpet. I started to confine him to one room with a litter box and he seemed to get the idea … until he had a very large bowel movement on the carpet. It was very soft but did have shape. I also started to notice his belly looked puffy. (Fourth clue?) I decided that it was all related to his food and switched him from the breeder’s Nutro Max Kitten to Orijen Cat and Kitten. He seemed much better and I focused on litter box training again.

The next week, he seemed fine and loved exploring his new home. He was an only cat, kept indoors, but received plenty of attention and toys.

The following week, something did change. He started to get more fussy with playing. I thought he was just getting bored, so I tried some new toys. By mid-week, he became a complete mush and would not play. I was home that day due to a freak flash flood and could not get to work, so it was really obvious. He also seemed really warm. That evening, I rushed him to the Animal Emergency Hospital when the roads were accessible. The emergency vet thought he was dehydrated and gave him fluids. She said he probably had some kind of parasite from the raw Cat Food and should monitor him. He seemed better, but something was still not right. I brought him back to the Hospital on Saturday to have the Head of Internal Medicine examine him. That was the first time I heard FIP. She was very concerned about the size of his belly. This little kitten had a 12-inch belly. She wanted to run a bunch of tests, but she already knew. She drew blood, a sample of the fluid and a stool sample. Within a few days, everything came back indicating FIP.

I started to research what this FIP was. I also joined a support group on Yahoo, FIPCatSupport. There is a lot of confusion and misdiagnosis when it comes to FIP. Cornell has tried to study it as well as different Foundations. No one has been able to get a handle on it. The only conclusion is when it appears, it is fatal. It is the nightmare disease!

Over the next week, my beautiful Lucky developed all the classic symptoms – beside the large “jelly belly” filled with liquid, he also lost muscle mass, developed an exposed spine under his fur, squinty eyes and complete loss of energy.  Through the support group, I started working with a FIP Researcher in Washington, studying healthy thymus immune function as it relates to FIP.  Her research shows a healthy thymus can overcome FIP,  and gives owners an option for helping to recover the  thymus health of the cat.  She also warns against the use of steroids like Prednisone which cause permanent damage to the thymus in cats.  Through a regimen of Homeotherapy and supplements, we did manage to reduce the fluid in his stomach by 1.5 inches. He also seemed to start to respond and was more alert again. Unfortunately, this past Thursday, he could not stand on his own and was having trouble breathing. I rushed him back to Emergency and put him on oxygen, but the disease had taken its toll. He stopped breathing and I lost my little dream kitten! He was only 4-months old.

I may have only had him for a month, but he had my heart. I loved him enough for a lifetime and he knew it. I just wish that I had more time with him.

NOTE:  A few people have emailed me that they are getting closer to a cure.  This is not true.  The Head of Internal Medicine at the Animal Hospital contacted Cornell and the different Research Foundations.  Almost all FIP research is on hold or has been abandoned in favor of more lucrative grants.  If this was a canine disease, there would be a cure already.  Felines do not get the research they deserve.  This needs to change!  We need a cure for FIP – Feline Infectious Peritonitis!

NOTE:  As of 12/31/2014, Mike Armenti, the breeder and owner of Xanadu Dream Bengals, has refused to honor his health guaranty for Lucky. Something to keep in mind when selecting a Bengal breeder. All he offers is heartache!

NOTE: I just read that Irene de Villers had past away. She had accumulated a wealth of FIP research which is still available online here:
http://www.angelfire.com/fl/furryboots/fip.html

20 Replies to “Lucky – My Bengal Dream Kitten with FIP”