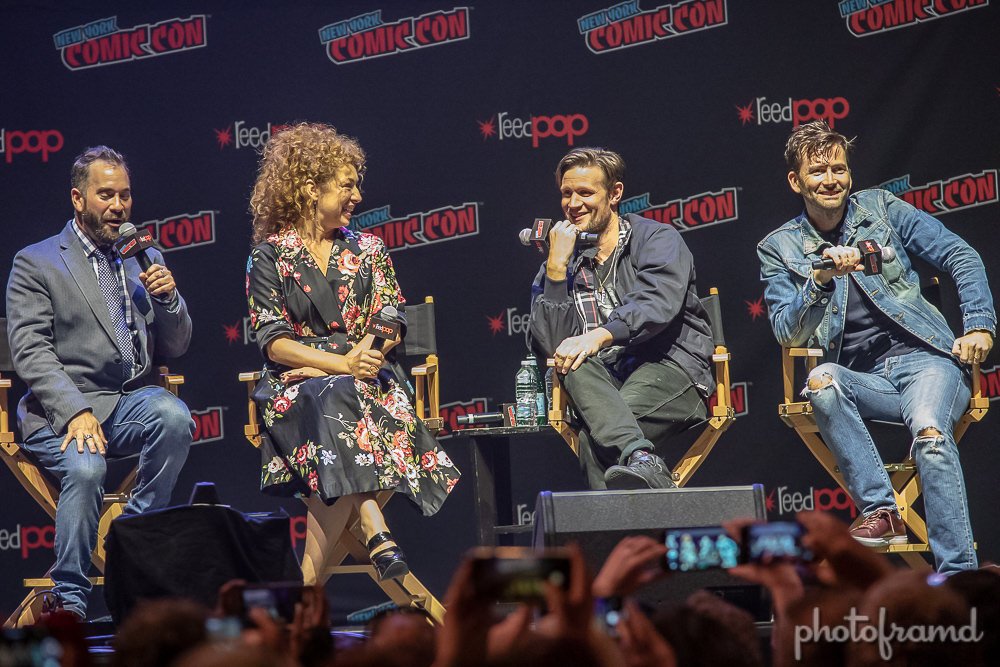 What would you say about a woman taking the stage with her two husbands who are really the same 900 year old person?  It must be a Doctor Who panel with Alex Kingston, David Tennant and Matt Smith!

In a rare group appearance, the 10th Doctor and 11th Doctor shared the stage with their wife, River Song at the Hammerstein Ballroom on October 5, 2018 as part of New York Comic Con weekend.  They shared both personal stories from their days on the Doctor Who series as well as group outings while filming.  One amusing rife involved filming locations.  When David Tennant played the 10th Doctor, the shows budget did not allow for on-location filming.  He did get to film in Rome on HBO’s Rome set only because, “it was a bargain.”  By the time Matt Smith played the 11th Doctor, there was an explosion in the shows popularity which also meant an increase in show budgets.  As a result, Matt & Alex filmed around the world including the US.  David deadpanned about Rome the entire night 😉

While it was great to see them together, I do have to fault Hammerstein.  There was a huge overhead screen which was not used.  People in the expensive floor seats had a tough time in the flat layout seeing the group.  In fact, all of my shots were taken overhead using the video preview screen.  Take a look. Be sure to look at my photos from the NY Comic Con floor!